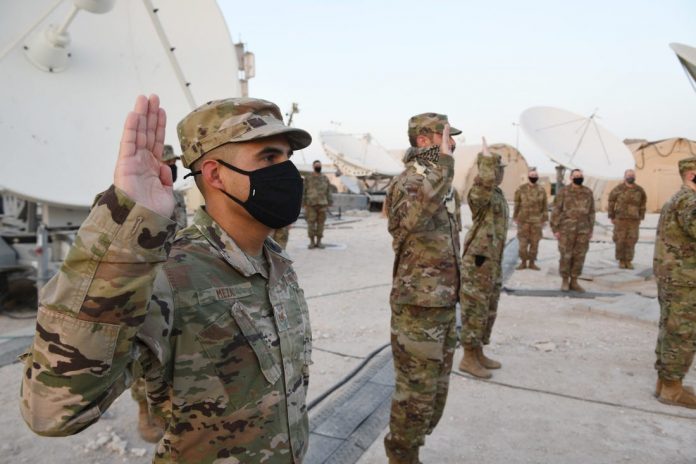 US space forces and the middle east

What was considered to be a joke among comedians and ordinary people, is starting to become an aim of the Trump administration, an achievement for the so-called “make America great again” slogan. It seems like we are already looking at the starting point. The Middle East seems to be the perfect spot for the US government to establish its first area observations. A squadron of 20 „core space operators“ has been stationed at the al Udeid Air Base in Qatar, in the unit’s first foreign deployment. The reasons behind the selection of the Middle East for observation from space have to do with the fact, that this region has a rapidly aggressive growing conflict between Iran and the rest of the middle eastern countries, according to Colonel Todd Benson, Director of Space Force Troops at al Udeid. As he states, „Other nations that are extremely aggressive in preparing to extend conflict into space“ (Debre, 2020). Source: Business Insider– https://www.businessinsider.com/first-space-force-members-make-first-deployment-to-middle-east-2020-9

The decision to deploy in the Arabian Peninsula first started during the first gulf war of (1990-91), which at that time triggered the invasion of Kuwait. That is the first time, in which US Military used GPS. Since then GPS Satellites have been used in other occasions as well, mostly to coordinate troops on the field (Debre, 2020).

Tensions between Washington and Tehran reached the highest point when US drone strike assassination of leading Iranian general Qasem Soleimani, considered the second most influential leader in Iran, happened.

„Since the fall of Sadam Husein, Iran has tried to interfere in the Iraqi state and influence its political regulations so that a pro-Iranian government would enter Iran. Iran has also tried to influence Iraqi politics by working with Shiite and Kurdish parties to create a weak federal state dominated by Shiites and amenable to Iranian influence. It has encouraged its closest allies—the Islamic Supreme Council of Iraq (ISCI), Islamic Dawa Party, and more recently the Sadrists—to participate in politics and help shape Iraq’s nascent institutions (Eisenstadt, Knights & Ali, 2011).

Tehran’s goal is to unite Iraq’s Shiite parties, so that they can translate their demographic weight which would make in percentage (60%)“of the total population. By doing so, they would be able to create a government, which has its base on the shiite concept of the state. This would then allow Iran to strengthen its control on the whole territory of Iraq (Eisenstadt, Knights & Ali, 2011).

The establishment of the first space force base seems to be a response to the event during which Iran’s paramilitary Revolutionary Guard launched its first satellite into space, revealing what experts describe as a secret military space program. The Trump administration has imposed sanctions on Iran’s space agency, accusing it of developing ballistic missiles under the cover of a civilian program to set satellites into orbit. According to captain Ryan Vickers world powers, such as Russia and China, are advancing on space programs. The development of advanced weapons could endanger US satellites (Eisenstadt, Knights & Ali, 2011).

On the other side we have the Strait of Hormuz, the narrow mouth of the Persian Gulf through which (20%) of the world’s oil flows. It has been the scene of a series of tense encounters, with Iran seizing boats it claims had entered its waters. One disrupted signal or miscalculation could provoke a confrontation (Hope, 2020).

For years, Iran has allegedly jammed satellite and radio signals to block foreign-based Farsi media outlets from broadcasting into the Islamic Republic, where radio and television stations are state-controlled (Hope, 2020).

This campaign seems to be an obstacle that is going to be used as an argument, whenever there will be options on how to resolve the conflict on the Persian Gulf. On the other hand it may also provide with an alternative solution on how to find a middle way to coexist without violating international public laws and regulations.