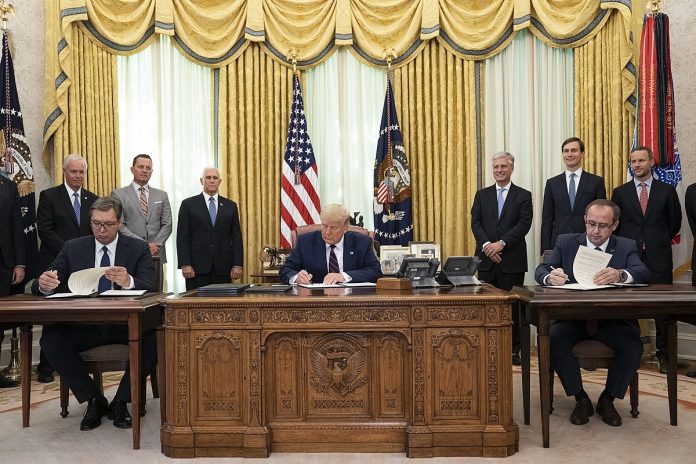 Since the end of the conflict and the declaration of independence of Kosovo, for almost a decade, Kosovo and Serbia have been negotiating the normalization of relations. A dialogue aimed at normalizing of the relations between the two countries started in 2011 with the mediation of the European Union and support from the United States of America.

In 2020, the intermittent negotiation process started moving forward again with the involvement of the US President, Donald Trump, who appointed Richard Grenell as the special envoy for Kosovo and Serbia’s peace negotiation. The US engagement resulted in two agreements on air and rail links between Belgrade and Pristina. These agreements were agreed on before signing in the White House.

On the 4th September 2020, the Prime Minister of Kosovo, Avdullah Hoti, and the President of Serbia, Aleksandar Vucic, signed an agreement on economic normalization. The US administration focused on the economic aspect first. The special Representative Grenell stated that he would set aside politics and focus on the economy. This approach justify aside not only politics but also coordination with the European Union, an important mediator of the dialogue. President Trump called it a „historic“ deal and a sign of the US commitment to the Balkan region, which was not in the centre of American interest recently as the focus has been kept in the Middle East region after the terrorism issues.

The signed documents serve the normalization of economic relations but do not carry the characteristics of a historical agreement. The researcher of D4D Institute in Kosovo, Visar Xhambazi, emphasizes that it cannot be considered a historic agreement because the situation has not changed before and after the meeting, the situation is the same. The main essence of the problem has not been addressed. In his article covering the meeting in Washington, researcher Xhambazi states that this is also not an international agreement, because international agreements are commitments made between two (bilateral) or more (multilateral) countries. When those agreements are ratified by signatories, they become treaties and under the international law, a treaty is any legally binding agreement concluded between sovereign countries (Xhambazi, 2020). In this case, according to Xhambazi, the president has signed two different documents, which are just commitments, not international agreements.

The process of discussions was characterized by internal political problems for both negotiating parties. The legitimacy and cooperation with the opposition during the negotiations was questioned. The current Prime Minister of Kosovo, Avdullah Hoti, governs with a small parliamentary majority and lack of political unity for the negotiation process. The presence of the President Thaqi at the negotiating table was impossible due to the war crimes indictment by the Special Chamber of Kosovo. The Serbian President Vucic won a 60 per cent majority in the last parliamentary elections, giving it a strong parliamentary mandate and, therefore the involvement of the opposition in the negotiation process with Kosovo was minimal.

In these circumstances, the meeting in Washington greatly polarizes the political class. According to the scholar Xhambazi, in Kosovo, the political debate at the party level has opposing views. While the ruling parties consider it a success, for the opposition parties the result is a loss, which creates a political polarization.

The US is in the middle of campaigning for the presidential elections and the Trump administration is right now counting very few results in foreign policy. A document signed between Kosovo and Serbia served Trump in this case, who, in an electoral rally, spoke of „stopping the mass killings between Kosovo and Serbia“ that he said have committed such crimes against each other „for centuries“. The researcher Xhambazi says that the purpose of the agreement was not to normalize Kosovo-Serbia relations, but rather to gain results within the American foreign policy in order for President Trump to accommodate achievement in his foreign policy in the service of his electoral base.

Also the former foreigner minister of Serbia Vuk Jeremic, in a discussion in Warsaw Security Forum, stressed that the meeting in Washington has more to do with Trump Campaign and Middle East than with Western Balkan.

The situation resulted in a short-term agreement. Not signing any unified statement did not rise to the level of a ceremony in the White House. The focus was on finalizing documents, where there was visible lack of a drafting strategy for the normalization of relations between Kosovo and Serbia. Despite this, it was presented to the public as a success story during the campaign. The researcher Xhambazi considers it neither a success story nor a failure. According to him, the agreement is titled as an economic normalization but points 11 to 16 do not belong to the economic normalization. In the case with Hezbollah, which the government considers a terrorist organization, such a point has already been implemented in June 2020, where the goal has not been the economic normalization but it was included in one of the points.

The compromise was reached on several topics, as is the case with Hezbollah. Also, the establishment of the embassies of Kosovo and Serbia in Israel contains more American diplomatic policy interests than the interests of Kosovo and Serbia. For Kosovo the establishment of diplomatic relations with Israel was a success, but what will be the price of opening the embassy in Jerusalem? The researcher Xhambazi states that the opening of embassies in Jerusalem does not serve both countries. Especially for Kosovo, this will complicate Kosovo’s membership in the UN, because the Arab states can use it as a reason not to allow Kosovo’s accession to the UN, or to other international organizations such as UNESCO.

Mini Shengen and the Ujman issue are also the points of debate in Kosovo. Mini Shengen had previously been opposed by the party of current Prime Minister Hoti. The reason for the accession of Mini Shengen according to Prime Minister Hoti, was a request of the US President Trump. This creates suspicions that the prime minister, instead of representing the interests of the state, decided to meet the demands of President Trump. Researcher Xhambazi considers the reasoning of Prime Minister Hoti not serious. He states that Kosovo cannot be justify out of regional initiatives due to the problems with Serbia, which is also a part of the Berlin process. Kosovo should take advantage of having a strategy, but Serbia will benefit more because it has a bigger market.

The Ujman issue can only be discussed between two independent states recognizing each other. The agreement can be reached based on international water laws according to the opinions in Kosovar society on this issue. According to Xhambazi, it is not an international agreement, it is only a feasibility study on the diversification of resources, the use of the lake in a qualitative way and on the investment opportunities.

The other points of the agreement are related to infrastructure projects. Kosovo pledged to stop applying for membership in the international organizations. Serbia in return promised to stop its de-recognition campaign against Kosovo, recognition of diplomas, the issue of missing persons and border crossing point. After meeting in Washington, Serbian police was deployed in the same building as Kosovo police. This is one of the points that were implemented, but how many other points will be implemented remains controversial because all the other agreements reached so far have not been implemented yet. In this case, the US involvement will contribute to the implementation of the agreements because the Americans are focused on results emphasises Xhambazi.

This meeting opened the doors to Serbia in the White House as an ally of the United States without a great commitment to the talks. Serbia was being adamant in not recognizing Kosovo’s independence such as the removal of point 10. The justification of the signed agreement is problematic for the Government of Kosovo. The weak legitimacy, lack of political unity and confrontation with the opposition threatening with a motion of no confidence remains an issue.

The goal was a quick finalization, which resulted in an unclear agreement in the manner of discussions. This did not convince Serbia to recognize Kosovo’s independence nor did it bring normalization of relations between the two countries. The economic agreements do not yield political results without coordination and strategic drafting with the European Union. The researcher Xhambazi stressed that the EU and the USA should be involved in the final agreement, which will serve peace in the region.

The special presidential envoy, Mr Grenell, is not a bridge of cooperation between the European Union and America. His contribution to the final agreement is called into question because the American diplomat is very unpopular in Brussels and Berlin. The negotiation process so far has not given any epilogue to a final agreement. The non-implementation of agreements reached so far requires the drafting of a new negotiating strategy and cooperation between the United States and Europe that are committed to pushing Kosovo and Serbia toward normalizing relations.

Visar Xhambazi is a policy researcher at Democracy for Development (D4D) Institute in Kosovo and a young professional advisor at United Europe in Germany. He holds a master’s degree in International Studies from Old Dominion University in Virginia, specializing in US foreign policy and international relations.

Mr Jeremić served as Minister of Foreign Affairs of the Republic of Serbia from 2007 to 2012. In 2013, he was named a Young Global Leader by the World Economic Forum and in 2014 he was appointed to the Leadership Council of the UN Sustainable Development Solutions Network (SDSN).

Xhambazi, Visar, (2020). Kosovo-Serbia Summit at the White House: What was it all about. New Eastern Europe. 14. 09. 2020 (https://neweasterneurope.eu/2020/09/14/kosovo-serbia-summit-at-the-white-house-what-was-it-all-about/?fbclid=IwAR0iqyMtS0tDSqBiUiyxMBfkHNJfMDVJLy1AB4GOBpVBjiZnMHKMl1LAZmA).