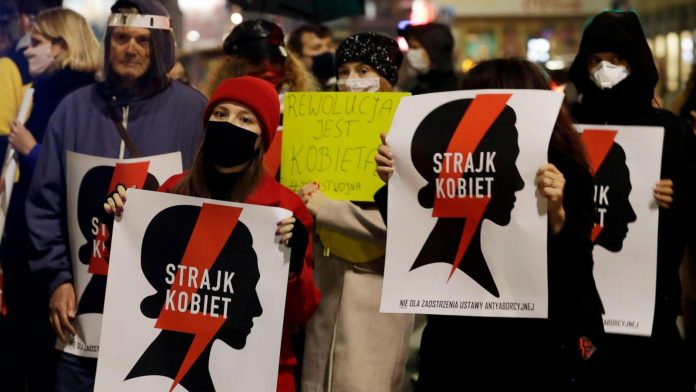 „This is about freedom and dignity of people“

(representative of the leadership of the All-Polish strike)

The Abortion Law has been one of the main topics of all election campaigns in Poland since 1989. Since 1993, there has been a law in Poland that prohibits the termination of pregnancy without medical indications – that is, a confirmed fact of danger to the life and health of the mother, as well as in the case of a diagnosis of an incurable disease in the fetus, that can lead to the imminent death of the child. It has acquired relevance since 2015 when the Conservatives from Law and Order returned to power.

It all started again in 2020 with the fact that MPs, who call eugenic abortion disrespectful towards the norm on the protection of human life, asked to consider this issue. They argue that, according to Article 30 of the Polish Constitution, every person has the right to life at all stages of his development. There are many opponents of this stance – among them are doctors who believe that the prohibition of eugenic abortion entails a threat to the physical and mental health of women. Officials from the ruling conservative party Law and Justice in the country demanded that it be prohibited to terminate a pregnancy, even if the fetus is diagnosed with an ailment that does not threaten the mother and child, for example, with Down syndrome (Loktionova, 2020).

Protests began in Poland on October 22, 2020. Protests of this scale have not been held in Poland since the Solidarity movement in the 1980s that led to the collapse of the communist government. The reason for the protests this time was the decision of the Constitutional Court, who considered it illegal to terminate a pregnancy with a high probability of fetal malformations. From now on, abortion is allowed in Poland only in cases where fertilization has occurred as a result of rape or incest, and also if the pregnancy threatens the woman’s life. The court’s verdict was met with the first protests on the same day – about a thousand disaffected people took to the streets in many Polish cities. In some cities, „black marches“ were held, the participants of which were dressed in all black – as a sign of mourning for their reproductive rights. Metal hangers have traditionally become one of the main symbols of these actions – they were once used by women to get rid of unwanted pregnancies on their own. The next day, protests continued as people marched through city centers, including in front of churches (Venkina, 2020). On October 25th, protesters decided to go on strike in churches. This time, protesters were using an intentionally vulgar slogan to send the message that well-mannered approaches have not worked. During the day in the country, protesters blocked roads in 50 cities, however no one got hurt, as in most cases protests were peaceful (BBC, 2020).

According to police officials, on October 28th, about 430,000 people took part in 410 protests across the country (Kuźniar, 2020). The organizers of the action say that on October 30th at least 100,000 people took part in the mass protests in Warsaw, which escalated into clashes with the police. Although, the riots were provoked by nationalists and football fans, who supported the law and wanted to thwart the protesters, the mayor of Warsaw said that if the police use force against a protester or release gas, they will lose funding (Pempel, 2020).

Prime Minister Mateusz Morawiecki called for talks with protesters and opposition lawmakers to find a solution. The organizers of the women’s marches have put out a list of demands, ranging from women’s rights to the resignation of the government. However, the PiS-led nationalist coalition won last year’s parliamentary election and PiS-backed Duda won another five-year term earlier this year and has no intention of quitting.

On November 3rd, the government announced that it was going to delay publication and implementation while leaders try to break the deadlock (SCISLOWSKA, 2020). The preparation of amendments to Polish abortion legislation was initiated by the Life and Family Foundation. According to the Foundation’s website, the Stop Abortion civic project, within the framework of which the relevant amendments were developed, “removes the eugenic prerequisite, which in practice means the selection and permission to kill children with suspected illness or disability” (Deutsche Welle, 2020). In a notable exchange in Parliament, lawmakers led by a member of the opposition party Lewica wore black T-shirts bearing the lightning bolt symbol of the day’s nationwide strike and held up placards as they confronted Law and Justice members. After the deadline to implement the court’s ruling passed in early November, President Duda proposed a “compromise” legislation that would allow the abortion of fetuses with “lethal” abnormalities while banning abortions linked to other conditions. But protesters say there is no room for compromise. “Our crucial demand is the resignation of the current government,” said Marta Lempart, one of the protest leaders (Pronczuk,2020).

About a thousand legal abortion surgeries were carried out in Poland every year, but women’s rights groups indicate that the actual number of abortions among Polish women, carried out either clandestinely or in other countries, reaches 80-120 thousand (Pempel, 2020).

“The decision of the Constitutional Court means a total ban on abortion because 98 percent of legal abortions in Poland are carried out due to fetal malformations,” said Kristina Katzpura, head of the Polish non-governmental organization Federation of Women and Family Planning (Venkina, 2020). According to the new bill passed in the first reading, fetal malformations should no longer be a pretext for legal abortion. Physicians who perform abortions contrary to current regulations can face jail terms ranging from six months to eight years. Although according to a public opinion poll conducted by the Gazeta Wyborcza newspaper, 59% of respondents did not support the change in legislation, the President of Poland Andrzej Duda, and the highest hierarchs of the Polish Catholic Church welcomed the court’s decision (Vachedin, 2020; BBC, 2020).