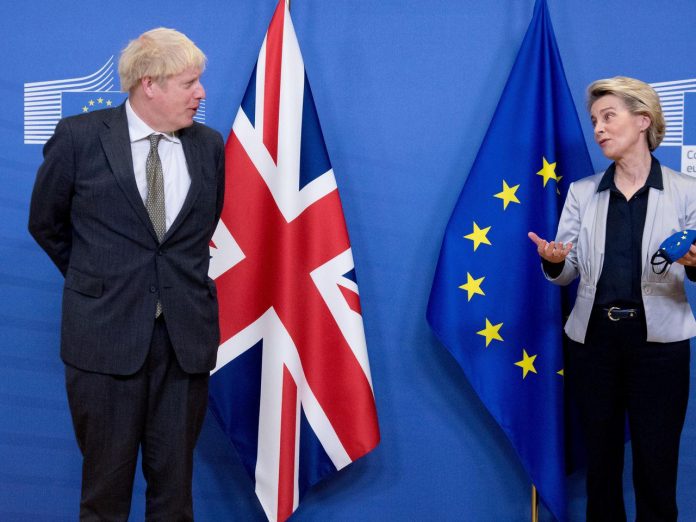 The European Commission has accused the UK of violating its obligations under the Brexit deal. Recall that the Brexit agreement between the EU and the UK entered into force on February 1, 2020, its Art. 5 provides for the obligation of both countries to take all necessary measures to ensure the fulfillment of the obligations arising from this document. Criticism of the European Commission was caused by a bill on the internal market, prepared by the UK government and approved by the House of Commons of the British Parliament on September 29. It gives the government the power to set rules for the movement of goods from Northern Ireland to the rest of the UK, as well as rules for providing government aid to businesses. At the same time, the agreement on the terms of Britain’s exit from the EU provided for its own rules for trade between parts of the country (Manuilova, 2020).

Talks will now continue in Brussels, with a focus expected on how close the UK should stick to EU economic rules in the future. The EU is determined to prevent the UK from gaining what it sees as an unfair advantage of having tariff-free access to its markets – not paying taxes on goods being bought and sold – while setting its own standards on products, employment rights and business subsidies. The EU is reported to have dropped the idea of a formal mechanism to ensure both sides keep up with each other’s standards and is now prepared to accept UK divergence – provided there are safeguards to prevent unfair competition (ВВС, 2020).

The hour-long meeting of European Commission President Ursula von der Leyen and British Prime Minister Boris Johnson on Wednesday, December 9, in Brussels ended inconclusively. „We have a clear picture of the position of each side, but the differences are still too great,“ von der Leyen said on the night of December 10. The head of the European Commission and the British prime minister agreed no later than December 13 to determine whether there is a chance to conclude an agreement on the relations of the parties after Brexit. On the morning of December 10, the head of the EU delegation to the Brexit negotiations, Michel Barnier, and the UK’s chief negotiator David Frost will resume the consultations (European Truth, 2020).

The biggest differences between the European Union and the UK remain primarily on three points: quotas for fishing of EU companies in the territorial waters of great Britain, guarantees on equal conditions of competition in the market, as well as on the mechanism of dispute resolution in case of violation of the future treaty (European Truth, 2020).

Fishing rights is one of the major area of disagreement, with the EU warning that without access to UK waters for EU fleets, UK fishermen will no longer get special access to EU markets to sell their goods. But the UK argues that what goes on in its own waters, and its wider business rules, should be under its control as a sovereign country (ВВС, 2020).

The EU summit, where countries were to agree on terms of trade with the UK after the Brexit transitional period (maintains the previous trade regime and ends at the end of December), ended inconclusively. Despite this, negotiations continued at night until the end of Sunday, December 13. The decision was to extend the negotiations, as all the deadlines had already expired. Brussels invited London to continue negotiations in the coming weeks, simultaneously recommending that EU members prepare „for all possible outcomes of negotiations“, the European Commission was instructed to develop the necessary measures on the part of the union. Commission head Ursula von der Leyen said the EU was ready to negotiate, „but not at any cost.“ In the absence of further progress, Prime Minister Boris Johnson and European Commission President Ursula von der Leyen should make a statement that further negotiations are not possible. It is possible that both sides are dangling concessions. I am far from sure that the negotiations end with an agreement, but the chances of a resolution are increasing again (Edovina, 2020; ВВС, 2020).

Both sides say they want a trade deal, but negotiations have stalled. The day before, Ursula von der Leyen stated that „the probability of not concluding a deal is higher than the conclusion.“ It is worth recalling that the UK left the EU in January, but remains its de facto member until December 31, while the transition period is in effect. If by this time a new agreement is not concluded, then from January 1, 2021, the EU countries and the UK will begin to trade on common terms, like all WTO members. (and pay duties, as companies from third countries now do) (European Truth, 2020).

Last week, the Confederation of British Industry and several other associations and trade unions called on Boris Johnson to do everything possible to conclude a trade agreement with the EU: companies are not ready for the absence of a deal and warn that without it, GDP growth in the next few years will be 6.5 percentage points lower (the biggest risks are the automotive industry, food and beverage manufacturers). The situation is exacerbated by the pronounced recession, which the British economy faced amid the pandemic: in the second quarter, there was a record decline of 19.8% compared to the first quarter (on an annualized basis, the indicator decreased by 21.5%) (Edovina, 2020).

The National Farmers‘ Union has warned there will be „significant disruption“ to the sector if the UK fails to reach a trade deal with the EU.And the British Retail Consortium warned the public would face „over £3bn in food tariffs [meaning] retailers would have no choice but to pass on some of these additional costs to their customers“. Taoiseach (Irish prime minister) Micheál Martin said he believed a no-deal scenario „would be very bad news for all of us“ and „an appalling failure of statecraft“ on both sides (ВВС, 2020).

Border checks and taxes will be introduced for goods travelling between the UK and the EU. But deal or no deal, we will still see changes.