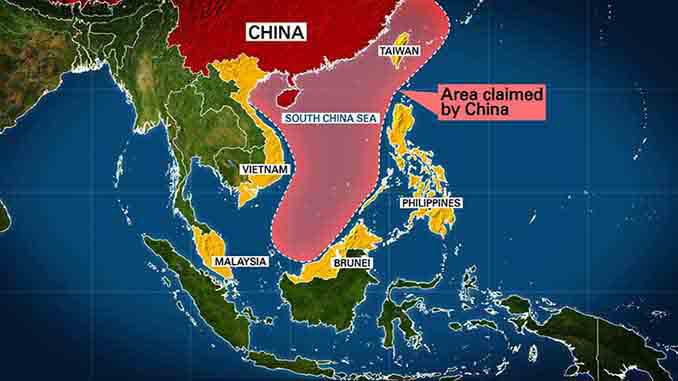 “China is asserting its interests in ways that threaten the foundational norms that govern the global maritime commons. This trend is most evident in the South China Sea, where China’s policies and activities are challenging stability and security.” (Dutton, Peter A.)

The South China Sea consists of four island groups, two of which, the Paracels and the Spratlys, are in disagreement. Two groups, the Crescent Group and the Amphitrite Group, constitute the Paracel Islands. They together comprise over 30 islets, sandbanks or reefs which span an ocean of around 15,000 square kilometers. Located in the northern part of the South China Sea, the Paracels are approximately equidistant from the coastlines of Vietnam and China (Hainan). China forcefully removed South Vietnamese soldiers from the Paracels in 1974, and since then it has been occupied solely by China, although it is still claimed by Vietnam. The Spratly Islands are claimed in their entirety by China, Taiwan and Vietnam, while some islands and other features are claimed by Malaysia and the Philippines. These islands are not crucial for international maritime navigation. However, the islands could be important in safeguarding the international shipping lanes and are often described as having strategic importance (Valencia, van Dyke & Ludwig, 1997).

China keeps claiming its sovereignty over the sea filled with 11 billion barrels of untapped oil and 190 trillion cubic feet of natural gas and removed other claimants like Brunei, Indonesia, Malaysia, the Philippines, Taiwan, and Vietnam. During 1970, China took over several islands and zones in South China Sea together with natural resources and fishing areas. The Chinese government fears that losing control of the South China Sea could damage China’s image as a superpower by keeping the military forces lurking close to its shores (Ramses, 2014).

Vietnam for instance, could feel pressure coming from mainland China, after being occupied for a thousand years and not willing to lose its part. Secondly, Philippines consider that pushing its western frontiers using the South China Sea could provide greater security interest. Malaysia is separated and connected by the South China and Brunei has access to oil reserves and fishing areas in the sea. Yet, in deep waters the seed of conflict is awaking. ASEAN together on the AFR (ASEAN Regional Forum) were unable to “do something” about the conflict in their respective areas of coverage. So why there is a relative peace (Chachavalpongpun, 2014)?

Many countries have a high interest in assuring the peace and stability in the region. All claimants take part in so called UNCLOS- the United Nations Convention on Law of the Sea but the tension goes beyond the local dispute. Another source of danger is the growing global rivalry between China and the United States. However, China in this conflict claims that they have “indisputable” sovereignty over the South China Sea. On the other hand, the USA did not ratify the 1982 UNCLOS maintaining thus, the freedom of navigation in and overflight over the high seas and is sanctioned by customary international law and no country can curtail that right. It is not only the United States whose interests might clash with those of China. There are also countries like India or Japan – each of them has a territorial dispute with China and wants to keep peace in the region as well as in the South China Sea. The rejection of “internalisation” of the Sea could affect many countries (Chachavalpongpun, 2014).

Some steps were taken in order to ensure the peace. While seeking to advance the „form“ of the undertakings, China and ASEAN should also aim to expand upon the „substance“ of the 2002 resolution, with the help of others. The declaration stresses the negotiated resolution of conflicts, the building of trust, freedom of navigation and overflight. The declaration calls for confidence-building steps, such as dialogues with defense and military leaders, equal and compassionate treatment of individuals at risk or in crisis, and voluntary notice of „other concerned parties“ of „imminent“ joint military exercises (Chachavalpongpun, 2014).

The Philippines, Malaysia and Brunei’s arguments are not completely explicit, but they seem to be based to some degree on the concept of geographical contiguity. These states tend to argue that, as a matter of justice, minor islands and other features adjacent to their main territories, within their EEZ or on their territorial waters, should belong to them. The question with regard to the islands in the South China Sea is whether, even though they were historically claimed by other claims, a state bordering the islands would assert jurisdiction over them through possession and effective control. One concern is how a constant showing of sovereignty over distant islands they never occupied could be displayed by China and Vietnam (Chachavalpongpun, 2014).

It is universally believed that by sending them to a foreign court or tribunal the parties can consent to settle South China Sea sovereignty disputes. This is attributed to the complexities of the historical conflicts, the number of parties involved, the vulnerability of some of the governments‘ claims and the islands‘ economic and geopolitical importance. Therefore, if the disagreements are to be settled, it will likely be done by arbitration or another sort of non-binding third-party conflict resolution. All the parties to UNCLOS are China, Vietnam, Malaysia, the Philippines and Brunei. Taiwan is ineligible to amend UNCLOS, as the state is not a member of the United Nations. On several topics pertaining to maritime claims in the South China Sea, there are specific rules (and often not so clear rules) in UNCLOS. However, UNCLOS does not deal with the aspect of the sovereignty, thus points out what maritime areas, as well as the rights, privileges, sovereignty and responsibilities of States in those maritime zones, may be asserted by States. To conclude, UNCLOS seems to be unable to cover main points, altogether with no provisions which refer to historic rights, in the current dispute over the South China Sea (Lay, William & Wei, Chunjuan,2013).

The claim of China has been clarified to a limited extent. The actions taken by China in response to those taken by the ASEAN claimants, however, have raised further questions as to the validity of its assertion and its conformity with international law. China will therefore be steadily under pressure to justify its argument and put it into line with the UNCLOS. In the meantime, the best course of action seems to be for ASEAN and China to work together in good faith.

Photo source: Joseph, S. (2018). The South East China disputes and the pivot to Asia. The geopolitics.com. Retrieved from: https://thegeopolitics.com/the-south-china-sea-disputes-and-the-pivot-to-asia/

Dutton, P. A. (2012). „Cracks in the Global Foundation: International Law and Instability in the South China Sea“. In Cooperation from Strength: The United States, China and the South China Sea, edited by Cronin, Patrick. Center for a New American Security: Washington, D. C.