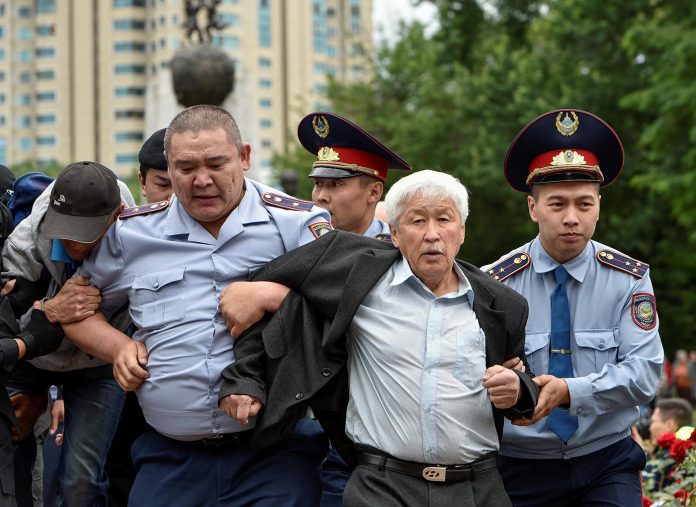 The harassment of certain rights groups in Kazakhstan is not a new situation. Kazakhstan government has plenty of restrictive laws and charges at their disposal to use against activists and organisations who do not fit into the line. In 2017, the government ran tax audits on three rights groups and also have repeatedly denied registration to feminist groups in recent years.

In 2016, Kazakhstan has adopted article 460-1 of the Administrative Code as a part of a package of amendments imposing burdensome reporting obligations (European Country of Origin Information Network, 2020). This new law became the centre of the government’s tactics to paralyse unwanted organisations.

When president Kassym-Jomart Tokayev in 2019 promised development of the country to a more civil friendly society or in other words “listening state”, most of the people were optimistic (Akorda.kz, 2019).

Instead, after two years of his rule, independent human and civil rights groups are complaining about the coordinated political pressure under the official argument of financial reporting irregularities, which led to crippling fines. Surprising, however, about the latest attacks is how many groups are targeted at once by the unlawful manner of the government (Rittmann, 2021).

In between October and November 2020, at least 13 NGOs throughout Kazakhstan received notifications that they have failed to properly report on foreign funds they have received dating back to 2018 (European Country of Origin Information Network, 2020).

In November 2020, the independent civil society organisations have made a joint statement in which they have expressed their fear that Kazakhstan authorities are intimidating, harassing and putting pressure on the civil society. All of this undermines their ability to freely carry out their work (KIBHR, 2020). They also state that the timing and the nature of tax politics from the officials has only one true aim, to paralyse activities of human rights organisations for some time.

In Kazakhstan, the government is deliberately targeting human rights nongovernmental organisations, with the help of tax authorities. The NGOs work under an everyday pressure of possible fines and even a possibility of suspension due to alleged financial violations. These NGOs include the Amnesty International, Front Line Defenders, Human Rights Watch and International Partnership for Human Rights (Lillis, 2021).

On January 15 2021, the tax authorities suspended work of Echo, an independent NGO, for three months and also fined it with a USD 1,400 fine over so-called financial irregularities (Mazorenko, 2021). The suspension of Echo, whose mission is to get public involved at all levels of government (Echo, 2021), came days after Kazakhstan held a parliamentary election, in which there were not allowed any opposition parties (Kumenov, 2021). Echo was preparing to publish its findings about the election at the time when they got suspended, what effectively delays the process of publishing.

The NGO Wing of Freedom also closely monitored the elections and they were as well fined after the elections took place (Lillis, 2021). “Targeting over a dozen prominent human rights groups with alleged financial reporting violations is more than gross overreach by Kazakhstan tax authorities,” said Marie Struthers, Eastern Europe and Central Asia director at Amnesty International. “It is a cynical attempt to silence independent and critical voices precisely when these voices matter the most” (Human Rights Watch, 2021). It is also of particular concern that this increased government’s activity in targeting the NGOs coincided with the parliamentary election in January 2021 (Radio Free Liberty, 2020).

Prohibition of polls and surveys

The whole anti-NGO campaign is only a part of a bigger picture. In December 2020, police officials detained activists and campaigners supportive of other parties then the ruling Nur Otan. Police have detained and fined at least 10 campaigners from pro-democratic party Ak Zhol. As the time came closer to the election-day, at least 25 civil activists were detained, fined and persecuted. All of this campaign against opposition has led to a few hundred protests in Almaty and other major cities around the country. In many cases, the government was expecting the protests and was preparing for them by detaining several activists from their homes, or on the street before they even had a chance to assemble. Up until January 2021, some 300 people have been detained in major cities of Kazakhstan (IPHR, 2021).

Since 2019, the officials in Kazakhstan began to suppress election polls run by the independent media or bloggers. In December 2020, several bloggers and public figures were summoned to the prosecutors office, where they were warned that they would be held responsible if they attempted to hold elections polls. Today there are only seven organisations that are allowed to conduct a public opinion poll and all of them are either state-owned or state-controlled institutions (IPHR, 2021).