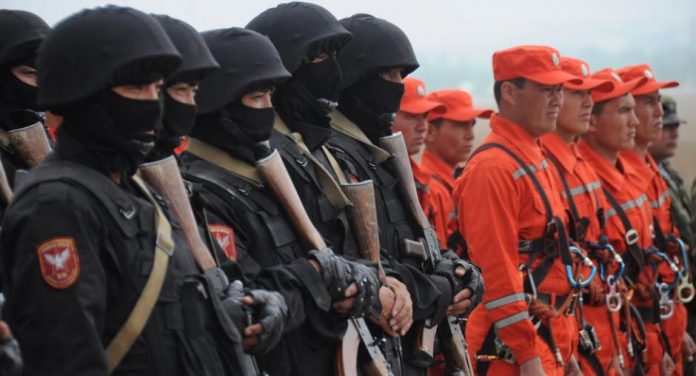 Turkmenistan is bordering Iran, Russia and shares the 804 kilometres long border with Afghanistan (CIA, 2021), but in recent years there are not officially recognized issues with terrorism. However, current travel advisories of the U.S. Department of state registers Turkmenistan as level 4, meaning “do not travel”. The latest country report on terrorism in Turkmenistan from 2020 claims there were not any incidents reported in 2019, nor there were any changes in legislation, law enforcement and border security. Turkmenistan continues to cooperate within the Eurasian Group on Combating Money Laundering and financing of terrorism (EAG), UN, C5+1 regional CVE framework (counter violent extremism) and OSCE (U.S. Department of state, 2020). According to the latest Global Terrorism Index (GTI) from 2020, Turkmenistan is ranked on the shared last 135th place, with zero score and zero terrorism impact. The report mentions Turkmenistan as a country without registered terrorist incident for five consecutive years (Global Terrorism Index, 2020).

Prior to the declaration of war on terrorism after the 9/11 attack, Turkmenistan had a friendly relationship with the Taliban, supplying them with natural resources. This fact most likely protected the country from attacks in the first decade of the 21st century, but in the second decade, also the borders of Turkmenistan became targets of Taliban attacks with casualties. Another problematic issue was Turkmen citizens fighting in Syria alongside the local terrorist groups (Soliyev, 2016, 2019). Numerous reports were claiming about 360-400 citizens fought, but the government denied this possibility despite the recorded videos and a few Daesh terrorists arrested in the southeast of Turkmenistan in 2017 (Umarov, 2019). The latest act in the war on terrorism by Turkmenistan was in December of 2020 with National Action Plan for 2021-2024 implemented in the Strategy of Turkmenistan to Prevent Violent Extremism and Counter-Terrorism. This plan is a result of cooperation between the country, the UN Regional Centre for Preventive Diplomacy for Central Asia and the UN Counter-Terrorism Office – UN Counter-Terrorism Centre under the Phase III of the project “Towards a comprehensive implementation of the United Nations Global Counter-Terrorism Strategy in Central Asia (UNRCAA, 2020).

The case of Turkmenistan is intricate, because of the nature of the government and state, which is authoritarian, isolationists and ungenerous regarding the share of any type of information. On the other hand, if there were major problems with terrorism within the state, the country would not be able to hide it properly. Turkmenistan is also famous for being a transit route for opium and drugs from Afghanistan to Turkey, Caucasus and finally to Europe (Soliyev, Umarov, 2019). All things considered, there is not enough credible information coming from Turkmenistan compared to its neighbours in Central Asia. With this in mind, the real image and state of terrorism in the country are unknown, behind the veil of information blockade.

Kyrgyzstan does not share a border with Afghanistan, but it does with China, which brings also a different challenge to the country compared to Turkmenistan. Current travel advisories of the U.S. Department of state register Kyrgyzstan as level 3, meaning “reconsider the travel”. Similar to the previous case, there were no reported terrorist incidents in Kyrgyzstan in 2019. On the other hand changes in legislation, law enforcement, and border security were significant. The whole description of changes can be found on the link in the sources, where the most important to be mentioned are the new criminal code which decreased criminal penalties for several terrorism-related crimes, three sets of electronic gates at the Manas Airport for better identification of Kyrgyz citizens returning from abroad or continuous terrorism-related arrests of citizens accused of fighting in Syria alongside the terrorist groups or uncover of local Daesh linked sleeper cell recruiting fighters. The government acknowledged about 850 citizens fighting under the flag of Daesh in Syria, but the real number is most likely much higher. Kyrgyzstan is also a member of the Anti-Terrorism Center of the Commonwealth of Independent States (CIS), EAG, UN and OSCE programs related to the war on terrorism (U.S. Department of state, 2020). According to the latest Global Terrorism Index (GTI) from 2020, Kyrgyzstan is ranked in 92nd place with a score of 0.95, meaning a very low impact of terrorism (Global Terrorism Index, 2020).

The most infamous terrorist attack in Kyrgyzstan was in 2016 when a suicide bomber in a car rammed the gate to the Chinese embassy in Bishkek and detonated himself. The explosion killed only him but injured three other people, all the employees of the embassy. The official statement claims that Syria-based Uyghur militants were behind this bombing, financially supported by Al-Nusra Front, where the suicide bomber was identified as ethnic Uyghur with a Tajik passport. Security officials also mentioned his connection to the East Turkestan Islamic movement, an internationally recognized terrorist group (Shepherd, 2016). In December 2018, director of the State Commission for Religious Affairs Zaiyrbek Ergeshov announced the official list of terrorist groups, including widely and locally famous Al-Qaeda, the Taliban, the East Turkestan Islamic Movement, Kurdistan People’s Congress (Kongra-Gel) or the East Turkestan Liberation Organization, The Turkistan Islamic Party (Islamic Movement of Uzbekistan), ISIS, Al-Nusra Front and others (KABAR, 2018).

Much is known about the Taliban, which is a bigger threat to Turkmenistan than Kyrgyzstan, but little is known about Turkistan Islamic Party formerly known as the East Turkestan Islamic movement committing a suicide attack in Bishkek in 2016. The case of this specific terrorist group is somehow mysterious because it was designated as a terrorist group already in the first decade of the 21st century by the European Union, United Nations, China, Kyrgyzstan and also by the United States, which meanwhile deleted it from their list. But since their designation, there were only a few specific attacks they conducted. Their publicity comes mostly from their actions in Afghanistan and Syria. Another issue is the name of this organization, where sometimes it is called the Turkistan Islamic Party (TIP), but sometimes the East Turkestan Islamic Movement (ETIM). The terrorist group, consisting mostly of Uyghur ethnic fighters, provides a threat to China and their Xinjiang region, where this minority lives, similar to the minority living in Kyrgyzstan. However, even here this organization was never very active, mostly before the Olympics in 2008, when they released a few threatening videos. Since then, their activity in China has decisively waned, the same goes for Kyrgyzstan since the 2016 attack (Zenn, 2018).

The central government of China used the Uyghur ethnicity connection between this group and the minority living in Xinjiang to boost their military presence in the region, cooperating with Kyrgyzstan through the various anti-terrorist exercises. Kyrgyzstan is more open to the share of information regarding terrorism as Turkmenistan, moreover, it is active in a bigger variation of programs and organizations fighting it. That said, Kyrgyzstan having a mountainous landscape is a country providing a chance for sleeper cells to organize for the Taliban, ISIS, Al Qaeda or Turkistan Islamic Party.

In conclusion, the development in recent years officially shows a stabilised situation in these two countries, yet it is important to assume them being essentially endangered by terrorism. Terrorism mostly connected to the jihadi ideology coming from Afghanistan’s Taliban, Uyghur’s Turkistan Islamic Party, universal Al-Qaeda and even their citizens fighting for the Islamic state abroad coming home. Other regional actors such as Russia and China are taking this threat into serious consideration looking at all the initiatives. The future is unclear, depending on the situation in Syria, from where a lot of fighters are coming to their home countries. A lot depends also on the situation in Afghanistan, where if the United States and NATO leaves, the Taliban’s hands will not be tied anymore to achieve their goals in Afghanistan, but also abroad.