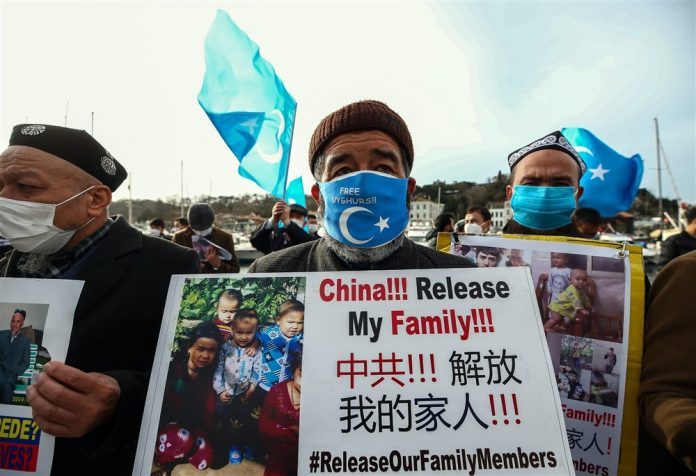 Xinjiang lies in north-west China and it is the country’s biggest region. Similar to Tibet, it should be autonomous, in theory. But in practice, any of the self-governance powers, that this region has, face major restrictions by the central government. Uyghurs living in this region have their own language, similar to Turkish, and see themselves as culturally and ethnically close to Central Asian nations (BBC, 2021).

It is estimated that up to 2 million Uyghurs and other Muslim minorities have passed through a system of detention camps set up throughout Xinjiang in recent years. In the camps, they have been subjected to intense „re-education,“ designed to strip them of their Islamic faith and ethnic identity in the name of fighting religious terrorism and separatism (Griffiths, 2021). Chinese authorities have systematically persecuted Turkic Muslims — their lives, their religion and their culture. Beijing has said it is providing ‚vocational training‘ and ‚deradicalization,‘ but that rhetoric cannot obscure a grim reality of crimes against humanity (Human Rights Watch, 2021). Chinese political representation has also openly compared Uyghurs to a “virus” in the past (Mattis, 2021). In the past few years, hundreds of Uyghurs, as well as other ethnic minorities in China such as Kazakhs and Huis have testified about being held in internment camps (Deutsche Welle, 2021).

Rome Statute of the International Criminal Court defines crimes against humanity as serious specified offences that are „knowingly committed“ as part of a widespread or systematic attack against any civilian population (International Criminal Court). The claimed crimes described in detail in the report include imprisonment, deprivation of liberty in violation of international law, persecution of an ethnic or religious group, enforced disappearance, torture, murder, inhumane acts intentionally causing great suffering or serious injury to mental or physical health, forced labor and sexual violence (Human Rights Watch, 2021).

Approximately 1 million people have been detained in 300 to 400 facilities across Xinjiang since 2017. The courts in the region are supposedly handing down harsh prison sentences by conducting sham trials, in which the detainees have no legal representation and are convicted without evidence or due process of any kind (Cohrad, 2020). According to official statistics, arrests in Xinjiang accounted for nearly 21% of all arrests in China in 2017, despite people in Xinjiang making up only 1.5% of the total population. In addition to all of this, evidence also shows that local authorities in Xinjiang have used various methods to damage or destroy at least two-thirds of mosques in Xinjiang (Human Rights Watch, 2021).

Local authorities are implementing a vast surveillance network strategy of Xinjiang residents in the region by collecting DNA samples when applying for travel documents and also fingerprints, iris scans and blood types (BBC, 2016). Another part of Chinas oppression strategy against Uyghurs was spying in cyberspace. Malicious codes have been developed by a hacker directly connected to the Chinese government to spy on Uyghurs via iPhones and also through Facebook (Collier, 2021; Whittaker, 2019).

Several Western countries have already imposed coordinated sanctions against Chinese officials believed to be responsible for the human rights violations in Xinjiang (Toosi, 2021). China retaliated with sanctions of its own against particular individual and businesses in western countries. It has consistently denied all reports of atrocities against Uyghurs, maintaining it is only “deradicalising” elements of its population in the interests of security (Deutsche Welle in The Indian Express, 2021).