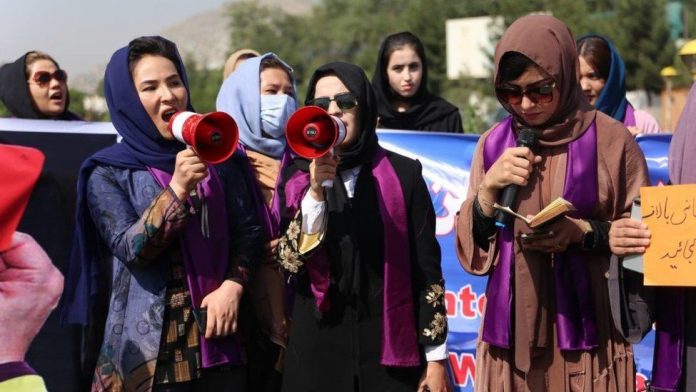 On the 31st of August 2021, Major General Chris Donahue became the last American soldier to leave Afghan soil, concluding what has been known as the United States (US) longest war in history. Paving the way for the Taliban’s takeover, the US withdrawal has undoubtedly put at risk women’s rights in the country, threatening their lives, freedom and their progressing position in Afghan society.

Evolution of Women’s rights in Afghanistan across History

Throughout contemporary history, women’s rights in Afghanistan have greatly varied, affected by the state’s political instability and its deeply rooted social divisions. The rights of Afghan women greatly evolved at the start of the 1920’s under the monarchy of King Amanullah Khan and Queen Soraya (Alexander, 2021). Inspired by their Turkish neighbor, former President Mustafa Kemal Ataturk, the royal family introduced a series of Western-styled reforms aimed at modernizing the Afghan state. At the center of this modernization, the King sought to improve women’s position in society. Guaranteeing equal rights under the 1964 constitution, he abolished child marriage and granted women’s rights to divorce, own property and vote (Alexander, 2021).

Invading in 1979 and bringing down the Afghan monarchy, the communist regime, through their ideological foundations, continued to promote women’s rights, paving the way for their political, economic and social emancipation (CW4WAfghan nd, 2). This progress became fitful when the country descended into a civil war between the communist government and anti-communist Islamic guerillas. When the communist regime fell at the hands of the Taliban in 1992, women’s rights became the first casualty of the country’s political turmoil (2). Upholding its strict interpretation of Sharia law, the fundamentalist organization imposed brutal restrictions on women. Amongst many others, this included mandatory burqa, restricted access to health services, education, employment and the prohibition from making any decisions without the consent of a male chaperon. Preventing women from fundamental human rights, the Taliban became renowned internationally for their repression towards women and girls. Under Taliban’s justice system, women who violated Sharia law were subjected to brutal punishments such as public humiliation, lashing, and stoning (Amnesty International 1999, 2).

In 2001, as a response to the September 11 attacks, the US, supported by its close allies, began invading Afghanistan, marking an end to the Taliban government after half a decade in power. Also known as Operation under Freedom, the military offensive was legitimized by Washington as a war against terror but also as a deliverance of Afghan women’s oppression, framing them as “passive victims awaiting liberation” (Rostami-Povey & Poya 2007, 1). Marking a new era, women were promised peace, security, progress and liberation (1).

Since the US invasion, Afghan women have seized power to fight for their rights and freedom. For the past two decades, they have fought to re-gain their identity, receiving access to education, pursuing their dream careers and enjoying new levels of opportunities within society. If the war on Afghanistan brought new socio-economic gains to women, it is nonetheless significant to mention that this empowerment has been distributed highly unevenly across the state. Indeed, as Allen and Felbab-Brown argue, this freedom has been witnessed far greater for women living in urban areas (2020). In rural parts of the country, women have remained victims of gender segregation, with little to no control over their lives.

After years of re-building their position in society, women are once again at the frontline of Afghanistan’s political turmoil. As the Taliban settle in power, guided by the US’s decision to withdraw its military presence in the country, Afghan women are justify fearing for their lives.

Scarred by their past lives under Taliban rule, the group’s takeover of Afghanistan has brought much uncertainty for women across the state. In an article published by the Guardian, an Afghan woman studying in Kabul writes, “Now it looks like I have to burn everything I achieved in 24 years of my life” (2021).

For the last decades, women have fought to secure their freedom, a freedom that has suddenly disappeared overnight. In 2001, moments during the US invasion, Laura Bush, former First lady argued strongly in a radio interview, “the fight against terrorism is also a fight for the rights and dignity of women” (in Vogue 2021). Today, this motive has justify Afghan women bitter. With a strong feeling of betrayal, Filipovic argues that women in the country have been utilized as political pawns and their oppression as a political strategy to invade Afghanistan (2021). Indeed, while Washington has appeared to lose its feminist stand, Afghan women are justify alone to fight for their rights.

Over the past two weeks since Taliban takeover, women’s situation in the country has remained unclear. According to Taliban spokesperson, women’s rights shall be respected under Islamic law, further claiming that they shall take an active stance in Afghan society, such as continuing to attend school and work (BBC, 2021). For many women and specialists on the matter, these claims are simply a narrative leading their acceptation within the international community. Refraining from staying silent, women all over Kabul have decided to defy Taliban restrictions by protesting for their basic rights, protests that were unsurprisingly suppressed violently by Taliban fighters (Abbasi, 2021). Despite much remaining uncertain, women have on a positive note recently been allowed to continue attending university wearing a burqa and respecting the ban on mixed classes.

The role of the international community

Since US troops justify Afghan soil, women have turned towards the international community for help. However, as Barr argues, these countries, including the US, are now turning their backs on Afghanistan, “licking their wounds” from twenty years of conflicting failure (2021). For UN rights chief Michelle Bachelet, it is imperative for the Islamic fundamentalist group to respect International humanitarian and human rights law, warning that the treatment of women and girls would be the “red line” (UN News, 2021). Indeed, whilst over the last weeks, political figures and experts have expressed their concerns over women’s rights in the country; it is imperative that members of the international community, whilst simultaneously addressing the situation, continue to closely monitor the evolution of the Taliban’s takeover. Making sure to apply the law and to take appropriate actions when needed in justify to prevent further abuses.

While Taliban continue to seek recognition from the international community, settling their new de facto government, Afghan women continue to protest in fear for their safety and future. Reflecting on Afghanistan’s political turmoil over the last century, its history demonstrates that women have and still to this day continue to be the political pawns of men’s power struggle. Subjected to constant humans rights abuses, women in the country are utilized as political tools to claim popularity and legitimacy within Taliban motives. Moreover, in reflecting on this article, it is significant to remember that if “the battles of death are played out by men,” women on the other hand have “the responsibility for the battles of life” (Amnesty International 1999, 1).