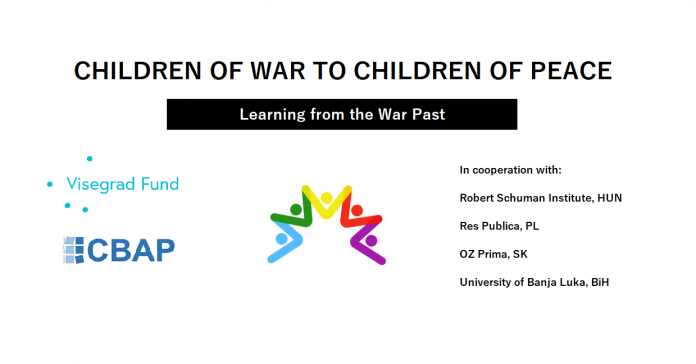 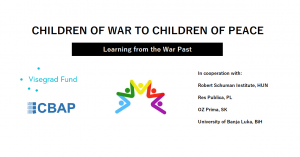 The founder of CAMR, Halina Chraščová, is recently in an external cooperation with CBAP, Prague (Centrum pro bezpečnostní analýzy a prevenci/Center for Security Analyses and Prevention) as a main project designer and coordinator for a Visegrad Fung backed youth ethnic reconciliation project implemented in BiH from September 2020,  „Children of War to Children of Peace, Learning from the War Past“.

The Dayton Agreement ended the Bosnian war but it also created divisions between ethnic groups living in BiH. This divisions are currently undermining the achievement of long-term stability and reconciliation of the country and represent potential problems for the future as well. Young generation is especially vulnerable segment of a population in that matter. They are growing up in divided society that is affected by the legacy of war.

Accordingly, the youth can become both a positive and a negative actor to the peacebuilding process. The question is how the young generation of BiH can enhance peace dialogue and reconciliation of the society? We believe that the education plays a significant role.

Our project aims to provide prevention, teaching tolerance and youth empowerment. The aim is to teach the youth to think critically about past events and constructively about future events in a way to lead peacebuilding and reconciliation dialogues in BiH.

The goal is to provide students with most relevant information about BiH war past through a first-hand experience by the team of lecturers – former underage soldiers who come from all three ethnic backgrounds – Bosniaks, Croats and Serbs, united in an organisation „Udruženje boraca – Maloljetni dobrovoljci odbrambeno-oslobodilačkog rata 1992-1995 Kantona Sarajevo“.

Previously at the frontline of their respective armies they are now working together to send a strong message of peace among young generation via the “peer to peer” format of education.They already pursued a project “Children of war to children of peace” in the past. What we aim with this project is to deepen the impact from the previous one and continue its ideas on conflict prevention and youth empowerment. The V4 perspective will provide an insight to peaceful coexistence of various nationalities working together for a common good as well. The most important message is to prioritize at any circumstances a constructive dialogue before entering a violent conflict.

The main objective is to teach young generation tolerance and provide them counter-narratives to one sided views of Balkan war past and to radical ideas.Young generation in Western Balkans should be also encouraged in open interethnic dialogue and mutual understanding rather than nourish hate and xenophobia.

The project has been proposed by CSAP (Center for Security Analysis and Prevention), Prague, Czech Republic in cooperation with our dearest V4 partners Schuman Institute, Hungary, Res Publica, Poland and OZ Prima, Slovakia and the University of Banja Luka, BiH.