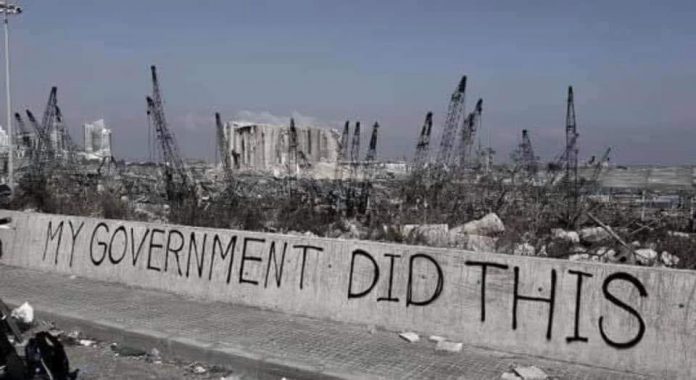 On August 4th a massive explosion in the port of Beirut raided the capital city of Lebanon almost to the ground. More than 200 people lost their lives, over 6,000 were injured and hundreds missing or trapped under the rubble for days. According to reporters on the ground, the damages caused in more than half the city surpasses $13bill. Hundreds of thousands of people are left homeless or unemployed as most of the city’s central districts were blown to smithereens during the explosion. This accidental explosion is considered the worst industrial accident to have ever occurred since the industrial revolution (Kaplow, 2020; BBC, 2020).

Unfortunately, the tragedy in Beirut was no accident but rather the horrible consequence of governmental neglect. For years the civil society and some authorities at the port have expressed their concern for the 2,735 tons of ammonium nitrate stored at the port. Ammonium nitrate is a highly flammable substance used in fertilizers and explosives. The quantity present in the port of Beirut had been confiscated from a cargo ship in 2013 and had been unsafely stored in the port. For years, the public had repeatedly appealed for action, but their requests fell on deaf ears. The governments of Lebanon all neglected to address the situation and allowed the time bomb to remain on their doorstep until time was up. While it may look like a terrorist attack, the explosion is a very unfortunate product of the deep paralyzing corruption and unaccountability that is prevalent in Lebanon’s officials (Kaplow, 2020; BBC, 2020).

A week after the blast, Lebanon’s government headed by Diab resigned. This resignation was motivated by the widespread anger and unrelenting protests of the people who seek justice and accountability for the tragedy that has happened and is also a testament to how deeply the explosion affected the country. The violent protests that make some city areas in Beirut seem like battlefields, were happening before the Diab’s government took office in January. They started during the last October after Lebanon’s lira was devalued by 80%. This caused the majority of the population to lose its life savings and made even the most basic goods unaffordable to them. The protests came to a halt as the pandemic spread and the lockdown measures were applied. The public anger and resentment kept boiling under the surface and it seems that the explosion on the 4th of August was the last straw. The public unanimously rose to protest wearing googles and masks as they climbed the barricades and hurled teargas at the police forces. The resignation of the Diab government did very little to quiet the protests. It is crystal clear that the people of Lebanon are protesting not a specific government but their whole ruling class. They demand the uprooting of the whole system that has so far always failed them (Hubbard, 2020).

Police forces have violently crashed with protesters, throwing teargas and firing rubber bullets at them. Protesters on the other hand, retaliated with firecrackers and with rubble and rocks. The Human Rights Watch (2020) has reported excessive use of violence towards demonstrators and protestors. This was observed in the large amount of teargas cannisters that were thrown by the state forces. While a small number of protestors retaliated by throwing rocks, the teargas was thrown in such large quantities that it reached also peaceful protesters on other sides of the squares or cities. The fuel that keeps these protests going is the deep anger at the negligence and incompetence of their ruling class. In one of the main squares, demonstrators have erected fake gallows as a symbol of what they believe will await their political class if they do not step down (McKernan, Chulov and Graham-Harrison, 2020).

The ruling elite of Lebanon came to power in the 1990 after the civil war had ended. Most of the officials that hold key positions in the country are either former warlords or officials backed by them to make sure that their interests are always protected. Corruption and a general disinterest for the people’s needs have flourished in this kind of governmental system. Problems were entrenched so deep, that the now resigned prime minister of Lebanon Hassan Diab declared upon his resignation that it was impossible for him and his new cabinet to push for change, as every attempt to do so was blocked or curved. The people of Lebanon also echo the same sentiments. Many protesters are desperate to the point where they either see no hope for their country anymore, or they see protesting until the end as the only shred of hope that they can cling to. They will not stop with the violent protesting until the whole ruling class is uprooted. At the same time, they are very aware that such a radical change is almost impossible in the face of a pandemic, deep economic crisis and mourning after the explosion (Hubbard, 2020; Explained Desk, 2020)

The present situation in Lebanon is dire. Protests do not show any signs of calming down and the ruling class does not show any signs that it is inclined to change its ways. There is a growing possibility that the tensions might possibly escalate into the next civil war in Lebanon, as many report that the chaotic climate is the same as it was in the beginning of the previous civil war that started in 1975. Right now, these assumptions remain on the speculative level. However, when public anger simmers for so long and when people have nothing left to lose, the possibility of another civil war does not seem so improbable.