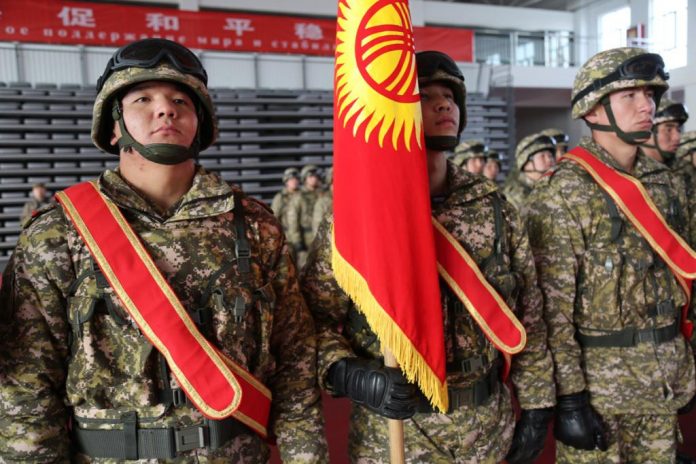 The China–Kyrgyzstan border is little more than 1 000 kilometres long, making it a great security concern for both countries. At the first sight, people would conclude for the China this border is quite short and unimportant, but the border actually belongs to the ones of the most interesting from China’s perspective. It is the border between Kyrgyzstan and Xinjiang Uygur autonomous region, where the Muslim majority of Uyghurs lives. Coming from this, for central government, the region is the matter and the question of national defence and security, source of the threat of terrorism or support of autonomous independence movements in the region, not to mention economic interests through the New Silk Road initiative (BRI).

History of military and security cooperation

The goals of the SCO are quite various, but the security and defence also belongs to it. It is safe to assume that this initiative was created with the aim to develop closer ties between China and other countries, preventing them from rallying against them in the future. On the other hand, China does not belong to the Collective Security Treaty Organization (CSTO), which is an intergovernmental military alliance of post-soviet countries dominated by the Russian Federation. This security situation, where the Russian Federation dominates militarily the region of Central Asia pushed China into bilateral military cooperation with the members of the SCO. This is also the case of the Kyrgyzstan.

Military cooperation between the two countries was dominated by joint exercises, conducted either in a bilateral or multilateral manner. Marcel de Haas in his article chronologically mentioned bilateral and multilateral military exercises conducted within the framework of the SCO till 2016, where both the China and Kyrgyzstan participated:

During the first decade of the 21st century, China provided technical military assistance to Kyrgyzstan worth USD 1.2 million in 2002, and military equipment to the Kyrgyz border services worth USD 700 thousand in 2008. There were also reports of 30 Kyrgyz officers who received training in China, but the small number was a result of the language barrier (Peyrouse, 2010). In 2013, China and Kyrgyzstan established a bilateral strategic partnership after the visit of President Xi Jinping at the Bishkek Summit of the Shanghai Cooperation Organization. On this occasion, the Joint Declaration on the Establishment of a Strategic Partnership between the People’s Republic of China and the Kyrgyz Republic was signed, altogether with other important documents of mutual cooperation (Ministry of Foreign Affairs of the People’s Republic of China, n. d.). In 2014, quarters for the Kyrgyz officers were built in Bishkek, together with promised investment or financial aid for military purpose worth USD 16 million by Beijing (Kucera, 2014).

The joint military exercises of the SCO continued also in the 2016 when Kyrgyzstan hosted drills in the mountainous Issyk-Kul Region with all the members except for Uzbekistan (Kucera, 2016). In 2017, bilateral anti-terrorist exercise drills took place in Xinjiang Uygur autonomous region, which was also witnessed by representatives from other SCO member states (Tao, 2017). In 2018, another “Peace Mission-2018” antiterrorist exercises were held in Russia, with all member states of SCO, this time including also new members Pakistan and India (Panda, 2018). The bilateral counter-terrorism exercise “Cooperation-2019” was launched at a training base in Xinjiang region in 2019 (Sukhankin, 2020). „Peace mission-2020“ in Russia was the last multilateral exercise for now.

Why is China so interested and focused on Kyrgyzstan? The answer is the threat of terrorism and public unrest in the region, connected to the development of the New Silk Road initiative (BRI). Terrorist attack on the Chinese embassy in Bishkek in 2016, violence between natives and Chinese workers but mostly the Uyghur minority living in Kyrgyzstan provide great concerns for national security of China. All of these factors are pushing China into deepened security and military relations with countries in the region.

To secure interests in the region, China can rely on two tools – exercises and military aid to boost the local security capabilities, which it is doing for almost 20 years already since the SCO was created. Second possible tool are private security companies in the region, financed by Beijing. This idea came to light after the violence between natives and Chinese workers in Naryn region, and there are indicators, that business owners from China have already asked for permission to deploy such security companies (Sukhankin, 2020).

Author’s opinion on the current situation

Since the events after the elections in Kyrgyzstan in 2020, it is unclear how the politics and foreign policy will be oriented because there is a possibility of inner turmoil and continuous protests and unrest. Information about any new bilateral or multilateral exercises in 2021 have not been publicised yet. Probably with the inner problems and ongoing pandemic the exercises will be halted, or executed later in the year. China is investing a great amount of money in the region, as I described in my latest article about the BRI initiative in Central Asia. Also, the threat of terrorist groups in the region or native’s opinion towards China are great concerns for the government in Beijing. The Uyghur minority question is a large topic for another new article, however taking into consideration also smaller minority living in the Kyrgyzstan bordering Uyghur autonomous region, it is not surprising that China and Kyrgyzstan are holding anti-terrorist exercise drills for 20 years because China sees the foreign and domestic Uyghur movements as terrorist ones.

On the other hand, the SCO cannot be defined as a Chinese sphere of influence, because of membership of the Russian Federation and India. The CSTO is also a clear military obstacle for China to conquer the region, for now. Question of further military cooperation is not on the daily menu in the upcoming years and most likely, it is going to be the same as it has been for almost 20 years until now. But again, economically, China almost conquered the region, military aspect is probably the only question of time in this century, depending on how the Russian Federation will develop in the coming decades since, for both of them, they are each other biggest competitors in the region.

De Haas, M. (2016). War Games of the Shanghai Cooperation Organization and the Collective Security Treaty Organization: Drills on the Move!. The Journal of Slavic Military Studies, 29(3), 378-406.