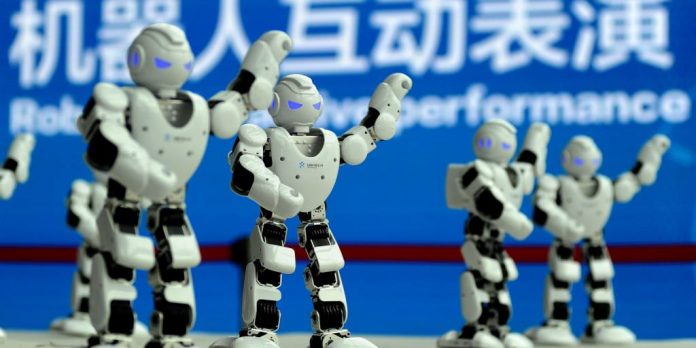 To start with, Made in China 2025 (MIC 2025) is a 10-year government plan launched in 2015 for the 13th and 14th Chinese five-year plans. According to the plan China should achieve complete independence in ten technological areas in the next decade, including the development of AI systems and the production of semiconductors. It is expected that it will be followed by two similar ten-year plans, so that by 2049 – the 100th anniversary of the PRC – the Celestial Empire will become a world leader in the spheres of smart production, science, and technology. China is going to make its market more open, by abandoning the targets for the share that Chinese companies should occupy in various industries. China seeks to end its reliance on international technology and upgrade its industrial capability and smart manufacturing by ensuring that innovation, product quality, efficiency, and integration drive manufacturing across 10 key industries. Those industries include advanced information technology, automated machine tools and robotics, aerospace and aeronautical equipment, ocean engineering equipment and high-tech shipping, modern rail transport equipment, energy-saving and new energy vehicles, power equipment, new materials, medicine and medical devices, and agricultural equipment. According to media reports, the new vision will encourage foreign investment and will drop previous market share targets that envisaged domination by Chinese companies. Beijing is implementing regulatory changes and introducing standards for key industries while setting a policy direction to pursue innovation and development. These standards potentially restrict foreign competition in China and provide access to technology from abroad by, for example, requiring banks to reveal their source code and use domestic IP and encryption to meet Beijing’s “secure and controllable” standards. Standardizing practices across entire industries is a priority, with the National Cyber Security Strategy and Cyber Security Law creating a legal framework for the future implementation and update of information technology products and services. Testing and certificate systems will be introduced to raise the quality of products to meet international benchmarks in all key industries, from medical patents to fuel consumption (ISDP, 2018; Cyrill,2018; Krasilnikova, 2018; Nevelsky,2019; Zhdanov, 2019).

The Made in China 2025 strategy was proposed by the PRC government, but the initiative comes not only from above but also from below. Dozens of factories automate production on their own and invest in new developments to cope with market competition. It is this property that will allow the country to become a technology leader despite the trade wars. (Krasilnikova, 2018). Both public and private research and development initiatives would allow Chinese companies to develop cutting-edge technologies in key sectors, accumulate intellectual property and gain access to foreign intellectual property in exchange for access to the Chinese market (ISDP, 2018). So far, China has managed to maintain high rates of economic growth mainly due to the fact, that Chinese workers earn relatively little and the country has practically no social protection system. This is the main problem of the authorities, as China will only be able to rely on domestic consumption as an engine of economic growth if the wages of ordinary citizens rise. And this, in turn, will lead to an increase in prices for Chinese goods, which will reduce their competitiveness in the world market, the expert sums up. According to the plan of the PRC leadership, China should turn from a supplier of cheap goods into a manufacturer of high technologies (Kohlman, 2020). However, Dongguan, a city in China, began implementing automation even before the official launch of Made in China 2025. The initiative came from local authorities, entrepreneurs, and academics who were trying to modernize the economy to survive in the marketplace. Even before the start of the state strategy, the district promised to allocate $ 30 million a year for the automation of production. Companies looking to invest in industrial robots and launch research projects received subsidies and tax breaks. At least 10-20% of businesses that applied for incentive programs received local government support (Krasilnikova, 2018).

In the next few years, China intends to radically reorient its economy. Namely, to reduce its dependence on exports and instead rely on stimulating domestic demand for Chinese products and services (Kohlman, 2020). Among its various goals, the MIC 2025 sought to raise the domestic content of core components and materials to 40 percent by 2020 and 70 percent by 2025. The plan explicitly referred to how much of China’s technology market could be controlled by Chinese companies and how many component parts in different products needed to be ‘Made in China’. The end goal of the MIC 2025 being self-sufficiency for domestic companies would then enable Chinese companies to compete for a greater foothold in global markets (Kohlman, 2020).

The program became a bone of contention for US President Trump’s administration and has partly been responsible for the trade war between the US and China since 2015. In these circumstances, in 2018 the United States increased tariffs on Chinese imports by $ 250 billion and later began to threaten to cut off all supply channels. A trade war between the US and China could divide the world into competing for economic blocs and spawn a new version of the Cold War, most countries will work to overcome tensions between the two sides in order to maintain strong economic ties with other countries. Furthermore, the expansion of China has for several years been causing concern, not only in the US but also the EU, as well as a defensive reaction in other prosperous countries that fear a sharp reorganization of the economic world order. Western countries, however, are alert both to the economic side of what is happening and to the strategic one. By gaining the upper hand in networking and innovation, China can gain control over information and the very fabric of the global economy. Under pressure from the United States and other countries, the Chinese government and the media stopped mentioning the Made in China 2025 plan. The trade war and the risk of deteriorating relations with the West prompting officials to devote more resources to less dependence on imports of important products such as semiconductors (Nevelsky, 2019; Cyrill, 2018; Mazorenko, 2020; Kohlman, 2020).

On the one hand, the US, European Union and Japan do not officially recognize China as a market economy, which constrains the country’s ability to conclude trade agreements. Therefore, China is striving to design its own – Comprehensive Regional Economic Partnership (RCEP), covering Australia, New Zealand, Japan, South Korea, and India. If countries are able to sign the constituent documents in the near term, together they will account for about 32% of global GDP and almost 30% of international trade. According to last year’s statistics, the country has signed 145 bilateral investment agreements, 110 of which have entered into force. This is more than any other country except Germany Mazorenko, 2020). On the other hand, Chinese officials have claimed that leading economies with high-tech industries such as the EU, Germany, and the United States have expressed their hostility to the initiative due to the fact that it would move China from a low-cost manufacturer to a direct added-value competitor (ISDP, 2018).