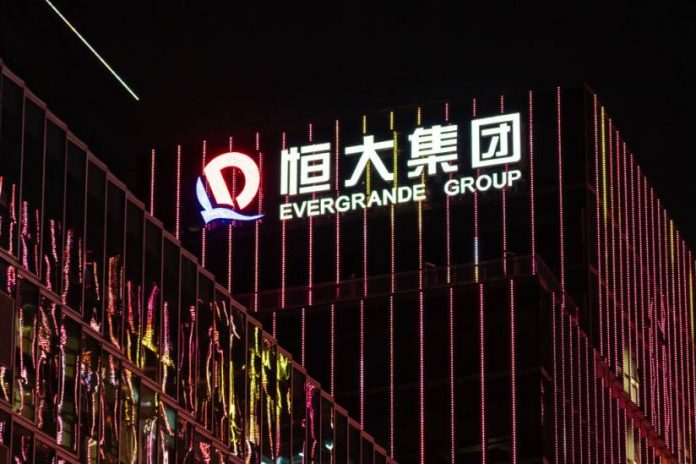 China has been signalling worrying signs of economic slowdown. In September 2021, Goldman Sachs lowered its forecast for China’s economic growth in 2021 from 7.85 to 8.2%. This degradation is mainly caused by energy shortages but also by the recent problems relating to Evergrande (Mendell, 2021).

Evergrande Real Estate Group is the world’s most indebted property developer. Fears over an Evergrande collapse have caused Chinese property developers bonds to slump as investors pull their money to safer quarters. The company’s troubles have made it harder for its peers to raise new funds or refinance, prompting some to announce they cannot meet their payments (Dou, 2021).

Evergrande is currently facing more than $300 billion in debt followed by hundreds of unfinished residential buildings and angry suppliers (Setvenson, Forsythe, Li, 2021). As a way to raise new capital quickly, the company has started to pay overdue bills by handing over unfinished properties and it has even asked employees to lend it money (Stevenson, Li, 2021). There have been further reports that these employees have been given a choice, either to buy Evergrande’s bond or if they refuse they would lose a job (Barbaro, 2021).

The company was founded in 1996 and at the time it has caught a way of an epic property boom in China as part of the Chinese plan to move the population from the countryside to cities. This put Evergrande at the centre of power in a property market-driven economy. This boom resulted in nearly three-quarters of Chinese households´ wealth being tied up in the housing market (Wan, 2021).

The company’s founder Xu Jiayin, as a member of an elite group of political advisors, gave his creditors more confidence to continue approving new lending schemes for Evergrande as it has expanded to the most unimaginable business sectors as bottled water, buying China’s best professional football team or even pig farming sector (Panja; Barbaro, 2021).

In recent years Evergrande has faced lawsuits from buyers who have been waiting for years for the completion of apartments they paid for. Suppliers and lenders are claiming hundreds of billions of dollars (Barbaro, 2021).

Theoretically, Evergrande might have been able to keep going if it weren’t for two major problems. Firstly, China is cracking down on the irresponsible borrowing schemes of property developers, which has forced Evergrande to start selling some of its own businesses (Hirsch, Stevenson, 2021).

These two major factors are contributing to the general slowdown in China, which could further erode demand for Evergrande’s properties.

Most of the cash that Evergrande has been able to get has come from “pre-sold” apartments that are not finished. This situation is impacting as many as 1.6 million people across China that are still waiting to receive completed apartments (Tania, Sharma, 2021).

Will China step in?

The current state of affairs in the political sphere of China is more steered towards an unwillingness to help save Evergrande, based on the high-level political meetings that have been taking place between Evergrande and government officials. At one particular meeting CEO of Evergrande Xu Jiayin received a response from the government to solve these debt problems in whatever way necessary even with the use of his own personal finance (Barbaro, 2021). Evergrande has mentioned that it had recently hired restructuring experts to help find all possible solutions for this problem (Stevenson, 2021). Despite this, the past experience tells that, when it came to the worst point China has shored up other large companies with big problems in the past.

The current campaign by the Chinese central bank to steer under debt-control and reduce the number of troubled developers says that at this point China thinks Evergrande would not have such a huge impact on China’s financial system (Mendel, 2021). However, the reality may be different. The actual panic of the investors could easily expand into the property market and hit prices, which in turn might have an effect on household wealth and confidence. It could expand outside of the Chinese border and shake the global financial system. And it would make it harder for Chinese companies to continue to relatively easily find foreign investors to finance their businesses.

One of the most renowned investors George Soros has warned that an “Enormous Crisis is Brewing in China”, with the danger of default on its debts payments it could cause China’s economy to crash (Trustnodes, 2021).

Chen Zhiwu, a professor of finance at the University of Hong Kong, said a failure could result in a credit crunch for the entire economy as financial institutions become more risk-averse. “An Evergrande failure,” he added, “was not good news to the financial system or the overall economy” (B: Stevenson, Li, 2021).

On the other hand, not everyone sees the matter this pessimistically. Bruce Pang, an economist at China Renaissance Securities, said a default could lay the groundwork for a healthier economy in the future. “If Evergrande were to fail with the fading belief of ‘too big to fail,’ it will prove Beijing’s more tolerance for defaults despite pains and disruption in the short term,” said Pang (2. Stevenson, Li, 2021).

Foreign investors are owed $7.4 billion of bonds coming due next year, which Evergrade has to raise from somewhere. A measure of the company’s ability to repay short-term borrowings deteriorated in the first half as cash and equivalents plunged to a six-year low, its earnings report showed (Bloomberg, 2021). Evergrande’s main share listing in Hong Kong has lost more than three-quarters of its value over the time frame of just one year (B: Stevenson, Li, 2021).

The main source of uncertainty from Evergrande is that some analysts compare the situation to Lehman Brothers failure and the start of the domino effect that led to the default of other banks, which further led to the financial crisis of 2008. The investors are justly concerned that if Evergrande fails on its debts, then all the money they are owed will vanish into the air.

In any bankruptcy proceeding, they would be low on the list of creditors to get any of the Chinese company’s assets (B: Stevenson, Li, 2021).

B: A. Stevenson., C. Li. (2021). Why China’s economy is threatened by a property giant’s debt problems. The Economic Times. 10. 09. 2021 (https://economictimes.indiatimes.com/news/international/business/why-chinas-economy-is-threatened-by-a-property-giants-debt-problems/articleshow/86097524.cms?from=mdr).