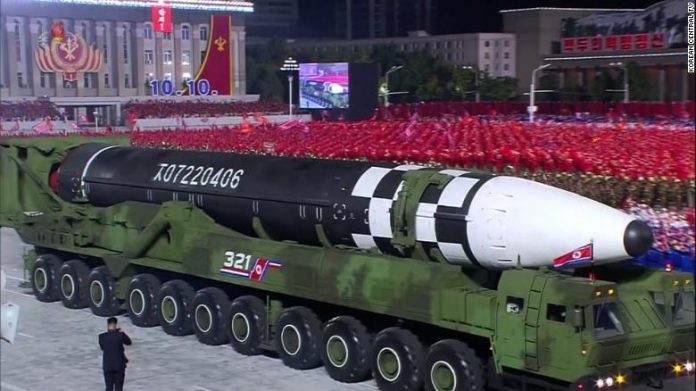 The Democratic People’s Republic of Korea (DPRK), more commonly known as North Korea, debuted its latest nuclear weapon on 10th October 2020 during a military parade in celebration of the state’s Workers’ Party’s 75th anniversary. The event took place at night and featured an unusually emotional speech by the country’s chairman, Kim Jong-un, who openly shed tears recalling recent hardships faced by North Korea, including tough sanctions and border closures to prevent the spread of COVID-19 (Choe, 2020b). The parade was a grand, highly choreographed showcase of the state’s military, culminating in the reveal of four massive missiles. The newly unveiled weapon is North Korea’s largest intercontinental ballistic missile (ICBM) so far, delivering on a promise made in Kim Jong-un’s New Year’s speech that the country was working on a “state-of-the-art weapons system possessed by only advanced countries” (BBC, 2020). Carrying these missiles were launchers that have increased in number and been “heavily modified” since last seen (BBC, 2020), making the new missile one of the largest road-mobile missiles in the world (Albert, 2017). However, this weapon has not yet been tested, and it is possible that these tests will not be carried out for months or even years (Albert, 2017).

North Korea has previously tested two other ICBMs, the first of which is the Hwasong-14 which has the ability to reach half of the continental US and all of Western Europe. The second, and larger of the two, is the Hwasong-15, which can strike all of the continental US. Both of these tests were conducted in 2017 (BBC, 2020). However, it is unclear whether or not these missiles could survive reentry and there are further questions on their accuracy, as they likely rely on old Soviet Union technology for guidance. Some experts believe that they now may have updated GPS navigation acquired from China (Albert, 2017). North Korea has additionally tested other nuclear weapons, with short, medium, and intermediate ranges. It is estimated by some experts that the country possesses between ten and thirty nuclear weapons, however, US intelligence estimates that number to be between thirty and sixty. The exact amount remains unknown (Albert, 2017).

Aside from nuclear weapons, North Korea is believed to possess other weapons of mass destruction, including both chemical and biological weapons, despite being party to the Biological Weapons Convention and Geneva Protocol, international agreements that outlaw such weapons (Albert, 2017). Furthermore, North Korea possesses the fourth-largest conventional military force in the world (Albert, 2017).

Should the rest of the world be concerned about North Korea’s military capabilities? In Kim’s recent speech, he reiterated that he would not use his nuclear arsenal for a preemptive strike, however, he claimed that he would use such weapons if he felt that the security of North Korea was threatened (Panda, 2020). Therefore, it is possible that the state would strike first as deterrence.

While his October speech lacked typical US criticism (Choe, 2020b), his New Year’s speech that promised the new missile directly addressed the US, saying that the longer the US waits to settle North Korea-US relations, “the more helpless it will find itself before the might of the Democratic People’s Republic of Korea,” (BBC, 2020). Relations between the US and North Korea have long been hostile, with the US fighting on the side of South Korea in the civil war that divided the Korean Peninsula, but they took a bizarre turn in 2017 when Kim and US president, Donald Trump, traded threats of annihilation and personal insults. The two leaders then went on to become the first sitting heads of state of their respective countries to meet with the other in 2018 at a summit in Singapore to discuss denuclearization (Boghani, 2019). Despite this unprecedented event, relations collapsed again at a 2019 Hanoi summit and have failed to improve since (Choe, 2020b).

Meanwhile, North Korea’s relations with its neighbor and rival, South Korea, have had some particularly tense moments in 2020, most notably in June when North Korea blew up a liaison office in the North’s border city of Kaesong. The office was empty due to COVID-19 concerns, but it served to facilitate dialogue between the North and South and was symbolic of improved cooperation. The move was in response to North Korean defectors sending anti-North Korean leaflets over the border from South Korea (Berlinger et al., 2020).

Both the US and South Korea reacted to the North’s new weapon by releasing a joint statement committing to strengthening the alliance between them. Despite both recognizing the security threat posed by North Korea, there have been disagreements over the cost-sharing that the alliance requires (International Crisis Group, 2020).

While the latest developments have been a cause for concern for the US and South Korea, North Korea frequently escalates tensions and then shifts to a more peaceful rhetoric. It is a strategy that the state has employed throughout the years to strengthen internal unity by rallying against an external enemy and gain concessions from other states (Choe, 2020a). Years of continued nuclearization and threats have never materialized into significant action from North Korea.

Even if the North Korean threats are mostly empty and strategic, the rollout of this weapon poses a new threat and puts further strain on the US, which only has one defense system capable of defending against ICBMs. It is likely that North Korea will attempt to fit multiple nuclear warheads to one missile in an attempt to overwhelm the US Ground-based Midcourse Defense system. With the large size of the new missile, it appears that this could be possible (Panda, 2020).

North Korea has shown that despite a year of increased hardships, it will not halt its nuclear ambition.