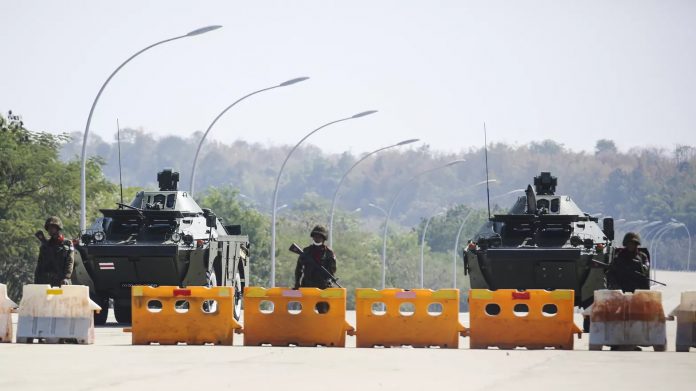 On 1 February 2020, Myanmar’s military overthrew the state’s civilian government in a coup d’etat following unfavorable results from November’s election. The Union Solidarity and Development Party (USDP), the party backed by the military and largest opposition party, fared poorly, with the National League for Democracy (NLD) winning 83% of available parliamentary seats (Goldman, 2021). The military claimed that the election was fraudulent and has contested the outcome in the country’s Supreme Court. Myanmar’s Union Election Commission did not find evidence of the military’s claims (AP News, 2021). Fears of a coup were sparked in the week before when a military spokesperson did not deny its possibility at a press conference (AP News, 2021). February 1 was the date of the new government’s first parliamentary session, which would have confirmed the result of the November election (BBC, 2021b).

In a televised address in the morning, the military announced that it had seized power from the civilian government, citing the country’s constitution which allows the military to declare a national emergency and take authority (AP News, 2021). Myanmar’s military has a history of ruling the country; General Ne Win led a coup in 1962 and the military maintained power for almost fifty years (BBC, 2018). During this time, Aung San Suu Kyi rose to international prominence for leading the NLD and peacefully protesting military rule and advocating for democracy. She was awarded the 1991 Nobel Peace Prize while under house arrest, having spent almost fifteen years in detention (BBC, 2021a). Her party won an election in 1990 following increased participation in the movement for democracy, but the military did not honor the election results (BBC, 2018). Finally in 2003, a “road map to democracy” was implemented, with plans for a constitutional convention. Myanmar’s current constitution, which contains the provision allowing for military control, was put in place in 2008 before the transition to civilian rule. The constitution gives the military considerable power, reserving 25% of all parliamentary seats and giving it direct control over the ministries of defense, home affairs, and border affairs (Drury, 2021).

Myanmar held elections resulting in a USDP victory in 2010 and officially transitioned to civilian leadership in 2011 with the swearing-in of President Thein Sein (BBC, 2018). However, these elections are widely regarded as fraudulent (BBC, 2018). In the 2015 election, considered to be first free and fair, the NLD claimed victory. Aung San Suu Kyi, constitutionally barred from holding the office of president, became the de facto leader of the nation, assuming the role of state counsellor.

Despite becoming an international icon for democracy, Aung San Suu Kyi has faced intense criticism over her handling of the Rohingya crisis. Beginning in 2017, Myanmar’s military led so-called “clearance operations.” These are missions which include burning Rohingya villages, and indiscriminately killing and committing acts of sexual violence against the Rohingya people, with the stated aim to drive them out of Myanmar. The violence was condemned by the international community and prompted the Gambia to file a lawsuit against Myanmar in the International Court of Justice (ICJ) for genocide (Simons & Beech, 2019). Aung San Suu Kyi personally travelled to the Hague herself to defend the actions of Myanmar’s military, claiming that the violence is a response to a terrorist threat (Simons & Beech, 2021). Her position on the Rohingya receives popular support throughout Myanmar, a sentiment that was solidified through the NLD’s recent election victory. But how does a former Nobel Peace Prize winner become a genocide apologist? As the military continued to maintain power, it is believed that she did not want to jeopardize the delicate power-sharing agreement between the civilian government and military (Albert & Maizland, 2020).

If this was her motivation, then she has certainly failed her goal. She is now in detention along with President U Win Myint, cabinet members, and regional NLD ministers. Some activists, writers, and politicians have also been detained (Goldman, 2021). Flights have been grounded and television broadcasts, internet access, and telephone services have been suspended (Goldman, 2021). Myanmar’s citizens formed long lines at ATMs as banks closed and stocked up on emergency supplies (Goldman, 2021).

The state of emergency is set to last for one year, with power transferred to General Min Aung Hlaing. He is to investigate election fraud and has announced that another election will be held after checking voter registration lists and reconstructing the election commission (Yeung, 2021). The general claims that the government will be handed over to the winning party and that democracy will be restored following this election (Yeung, 2021). For now, Min Aung Hlaing has selected a cabinet composed exclusively of generals (Beech, 2021).

The reason for the coup is unclear. As noted, under the current constitution, the military maintained considerable power and has been able to act with impunity (Drury, 2021). Given the popularity of Aung San Suu Kyi and the NLD, it is possible that the military will face backlash from Myanmar’s people, making the move to seize power appear more risky than rewarding (Drury, 2021). However, some believe that Min Aung Hlaing had ambitions to become the president of Myanmar after his retirement (Beech, 2021). But with the NLD in power since 2015 and the poor performance of the USDP in the recent election, perhaps the general felt the need to act (Beech, 2021).

What is clear, however, is that the coup does not bode well for the future of the young democracy. Foreign investors are unlikely to risk investing in a country with instability, and Myanmar is already suffering economically due to the pandemic (Beech, 2021). As people fled Myanmar following past coups, it is possible that they will flee again, causing concern about COVID-19 spreading and worsening the health situation in the country (Kurlantzick, 2021). Another issue is the potential for insurgent groups to increase violent activity, a troubling potential outcome in a state with violent conflict already (Kurlantzick, 2021). Lastly, there is concern for human rights, as protesters could be met with force or jailed. Perhaps of greatest worry is the fate of the Rohingya and other minority ethnic groups. With General Min Aung Hlaing, the architect of the clearance operations, at the helm of the country, their status could become even more precarious.