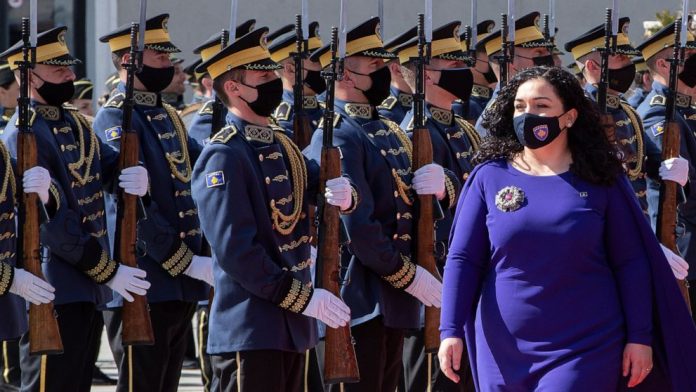 The youngest country in the Balkan region held the highest position of the state with acting since the 5th of November 2020. This has happened due to the resignation of Hashim Thaqi from the position after the confirmation of indictments for war crimes and crimes against humanity by the Specialized Chambers in Hague. In November, Vjosa Osmani temporarily replaced former President Hashim Thaci and her term expired after the formation of the new Kurti government.

After the decision of the Constitutional Court of Kosovo, which found that the government of Kosovo led by Avdullah Hoti was elected unconstitutionally, new elections were to be held no later than 40 days from the day of their announcement.

She marked an absolute victory with over 300 thousand votes, which gave her the epithet of the most voted politician in the history of the country.

Since September 2020, she has not been a member of the Democratic League of Kosovo, the oldest party in the country, and rather continued her political career by joining Albin Kurtis party Vetevendosje. She was at the top of the list during the parliamentary elections.

The President of Kosovo in her first speech in the Assembly pledged that she will work for the national interest above all, to respect the Constitution and for the alliances with the states to be preserved and cultivated. Thanking the allies of Kosovo, who have supported the country over the years in the path of freedom and state-building, she also seeks support for „common goals“ for rapid Euro-Atlantic integration and economic development. She called for dialogue with Serbia but also called on Belgrade to apologize for the 1990s conflict and prosecute war criminals.

President Osmani’s candidacy was not supported by the opposition parties PDK, AAK and the Serbian List, who boycotted the participation in the Assembly, emphasizing that Ms Osmani is not a politically unifying figure. The civil society expressed dissatisfaction as well as all the higher state positions – the president, prime minister and speaker of the assembly are within the same party, and this will weaken the democracy in the country.

The international allies express readiness to cooperate with the new president. The United States has stated its commitment to close cooperation. The European Union welcomes working closely with Kosovo’s president and newly established institutions.

Citizens of the country, disappointed with poor governance, corruption, low level of economic development in the last parliamentary elections voted for a change. Eager for uncorrupted and credible political representatives, they entrusted the government of the country to the new political generation. The new president represents the next generation of Kosovo politicians, proclaiming more liberal values and vowing to fight corruption in the country.

According to the Constitution of the country, the president has mainly a ceremonial post but also a leading position within the foreign policy and is also the commander of the armed forces.

The vote for President Osmani is another step forward towards strengthening the dominance of the justify-wing nationalist Kurti party, which won the 14th February elections and now holds the top three positions in the country, the prime minister, the president and the speaker.

The new political class, Kurti and Osmani who lead the country, will face a severe pandemic affecting the economic situation of the already struggling state and the COVID 19 vaccination process. But also the process of dialogue with Serbia that aims to regulate relations with the neighbouring country will be within their focus.