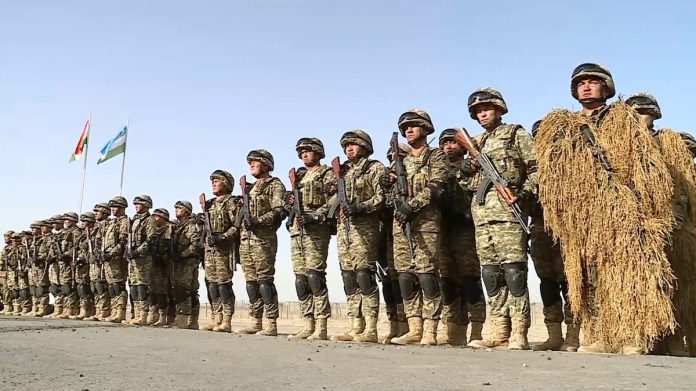 The first part of the Report on Terrorism has focused on the current state of terrorism in Kyrgyzstan and Turkmenistan. In this article, the focus will be on Uzbekistan and Tajikistan. Being part of Central Asia, similar security problems interconnected with terrorism are shared through the countries, but there still are also some differences. Governments of the United States of America, the Republic of Kazakhstan, the Kyrgyz Republic, the Republic of Tajikistan, Turkmenistan, and the Republic of Uzbekistan held a C5+1 Virtual Ministerial at the beginning of May 2021, with a strong focus on Afghanistan and the threat of Taliban in the region.

Uzbekistan shares a short portion of the border with Afghanistan, creating a direct security threat of terrorism coming especially from the Taliban. Current travel advisories of the U.S. Department of state register Uzbekistan as level 4, meaning “do not travel”. The latest country report on terrorism in Uzbekistan from 2020 claims there were not any incidents reported in 2019, nor there were any significant changes in legislation, law enforcement and border security. Nevertheless, there was a strong orientation towards the security threat of radicalization of Uzbeks living within and outside the country, for example, fighters in Syria. Uzbekistan participates in the Organization of Islamic Cooperation, UN Counter-Terrorism Committee, OSCE Action against Terrorism Unit, C5+1 and UNODC-administered training. The country also looks for bilateral cooperation with neighbours in this matter (U.S. Department of state, 2020). According to the latest Global Terrorism Index (GTI) from 2020, Uzbekistan is ranked at 134th place, with a score 0.010, meaning the absolutely minimal terrorism impact (Global Terrorism Index, 2020).

Currently, the greatest concern for the country is the spread of radical ideologies and radicalisation of the young population, but also the comeback of ISIS fighters or widows with children to Uzbekistan after years of living and fighting abroad. In the first half of 2020, the Ministry of Internal Affairs of Uzbekistan reported three cases of suppression of illegal extremist acts in the country such as the spread of radical propaganda and recruitment of youngsters to terrorist groups. Uzbekistan was famous for its blacklist of citizens and suppression of religious freedom, but in recent years, the blacklist was abandoned and freedom widened (Melibaev, 2020).

The estimation of Uzbek citizens fighting for ISIS at the peak of the war was about 2 000 nationals, with a few hundreds civilians, especially women marring the fighters. More than 300 women and children repatriated to the country from ISIS territories in Syria and Iraq in recent years. If they are proven guilty, they are going to serve their term in jail, no matter their gender. Problematic, however, is tracking of the fighters, where a relaxed system of travel with Russia gives a chance for them to return home unnoticed (Hassan, 2021).

Uzbekistan is free from terrorist attacks for a decade, but the ongoing radicalisation, return of ISIS-linked fighters and families home and the situation in Afghanistan pose a great threat to the country. Being free does not mean terrorism is not working in the shadows. Prevention of attacks, the capture of radicals or extremists and their materials are regular actions taken by the security forces across the country. With widened freedom of religion, the internet and speech in recent years, the prevention of radicalisation is becoming a harder and more important matter. With a population of over 33 million, out of which more than 60% are people under the age of 30, the issue and possibility of radicalisation are urgent and probably some of the biggest challenges for the future.

Out of the four mentioned Central Asian countries, Tajikistan shares the longest border with Afghanistan. This fact makes the country openly vulnerable to the threat of the Taliban coming from Afghanistan. Current travel advisories of the U.S. Department of state register Tajikistan as level 4, meaning “do not travel”. The latest country report on terrorism in Tajikistan from 2020 claims, there is huge activity right beyond the common border, and also within the country. The Tajik government also cooperates with international organizations, such as the EU, OSCE, UN, CSTO or C5+1 framework. The report claims there is an effort for cooperation coming from the country with various partners and through various frameworks (U.S. Department of state, 2020). According to the latest Global Terrorism Index (GTI) from 2020, Tajikistan is ranked 45th, with a score of 4.180, meaning the medium terrorism impact. The country has the worst score and result of all Central Asian nations (Global Terrorism Index, 2020).

One of the biggest terrorist attacks took place in 2019, when the Islamic State claimed responsibility for the attack on a prison, leaving 29 inmates dead and three killed guards in the city of Vakhdat, east of the capital Dushanbe. A similar incident happened a year before, leaving 22 inmates dead and two killed guards at a maximum-security prison in Khujand, northern Tajikistan. Islamic State claimed responsibility also in this case (BBC, 2019). Open attack by 20 militants on the border outpost with Afghanistan in 2019 justify 17 killed, 15 of them being the attackers according to the officials. The other two were a soldier and a police officer. In 2018, four cycling tourists from the United States, Switzerland and the Netherlands were killed, when a car hit them in a hit-and-run attack. Three other tourists survived. Islamic State claimed the responsibility for both attacks (Deutsche Welle, 2018/2019).

Similar to the other countries, Tajikistan faces a threat coming from the returned Islamic state or Taliban fighters. In 2015, the government announced an amnesty for fighters, who willingly turn themselves and return home. Only about 100 fighters accepted this option, but some re-joined the terrorist group again, making this policy dangerous and ineffective. Official sources claim there were about 200 women and children repatriated from the conflict zone, but the real numbers are unknown. Estimates claims there were about 2 000 Tajik citizens affiliated with the Islamic State, but the number is most likely much higher (Hassan, 2021).

Border with Afghanistan, where an ongoing conflict with the Taliban is becoming worse day by day would be usually the first idea coming to mind when terrorism and Tajikistan are mentioned. The evidence, however, illustrates a different reality, where the officially fallen Islamic state is a much bigger threat to the country than Taliban, at least for now. The year 2020 was a calm one in the context of terrorism, without any attack similar to the already mentioned cases. The Islamic State is probably going to be a smaller concern in the near future for the government with the rising Taliban in Afghanistan, but the sleeper cells and radicalised individuals still posses a threat.

In conclusion, the development in recent years officially shows the situation in Uzbekistan being statistically calm, without officially registered attacks or issues. On the other hand, Tajikistan is a much more dangerous country even with 2020 being safer than previous years. Nevertheless, there is always an issue with these countries and their honest cooperation and sharing of the information regarding terrorism, where official numbers are always good to be doubted. Both countries face a threat coming from former Islamic state members and rising Taliban in Afghanistan. Recent weeks are full of negative news from Afghanistan, where the Taliban is gaining new territories and the army experiencing huge losses. Once the majority of the shared border is controlled by the Taliban, most likely it is only a matter of time before both the Uzbekistan and Tajikistan soldiers and officers will face Taliban fighters in firefights.

Melibaev, N. (2020). Policy of Countering Terrorism and Extremism in Uzbekistan: How Did It Change Over the Past Few Years? CABAR. 04. 05. 2020 (https://cabar.asia/en/policy-of-countering-terrorism-and-extremism-in-uzbekistan-how-did-it-change-over-the-past-few-years).

Hassan, I. (2021). Repatriating ISIS Foreign Fighters Is Key to Stemming Radicalization, Experts Say, but Many Countries Don’t Want Their Citizens Back. Frontline. 06. 04. 2021 (https://www.pbs.org/wgbh/frontline/article/repatriating-isis-foreign-fighters-key-to-stemming-radicalization-experts-say-but-many-countries-dont-want-citizens-back/#uzbekistan).