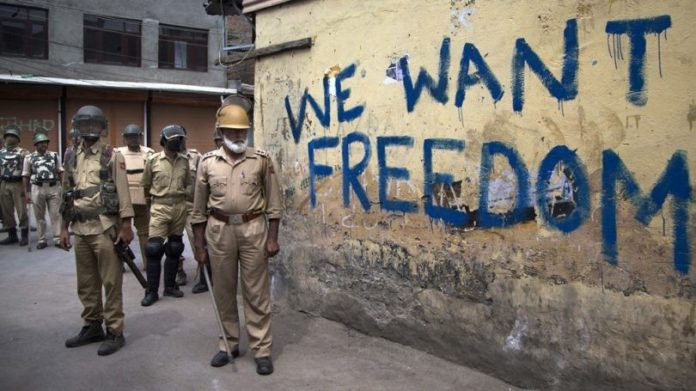 Jammu and Kashmir have been a disputed territory between India and Pakistan since both countries attained their independence from Britain. The dispute became the major cause for the two wars between India and Pakistan, which was concluded in a cease fire and the division of the region between the countries. Since then, the Indian government granted the province special autonomy in all matters except for foreign policy and defense, protected by the so-called Article 370. This very part of the Indian constitution was revoked by the ruling party BJP in August 2019 and thus causing an ongoing chain reaction of fear, unrest and potential violations of human rights (Al Jazeera, 2019).

One might ask oneself; how did Kashmir end up in this situation? Kashmir got its special status at the end of the British colonial rule in India in 1947, when its then ruler Maharaja Hari Singh signed a treaty of Ascension for the Jammu and Kashmir province to join India, in exchange for protection against invasions from Pakistani tribes. This led to the creation of the Article 370, that was specifically drafted to protect the autonomy of the region and its demographic. Jammu and Kashmir were allowed their own legislature, flag and other state symbols. Furthermore, Article 35a was added to the constitution in 1954 to ensure that the population of the area were protected and prioritized when it came to land ownership, attainment of government jobs and scholarships. Kashmir had full rights to decide who became a permanent resident and extended these rights to all who were born in the region or settled there before 1911. Temporary residents were banned from the ownership of land and government jobs. The goal of this article was to protect the demographic of the only province in India where Muslims constitute a majority (Al Jazeera, 2019; Srivastava, 2019; BBC, 2019).

Last year on August 2019, the Prime Minister of India Narendra Modi revoked these articles from the constitution and thus removing any special status that had protected Kashmir’s autonomy so far. The decision was met with strong opposition in parliament from both the political opposition and the regional parties, who condemned this decision as illegal and undemocratic. Immediately after the announcement, there was a complete media shutdown in Kashmir. The telephone lines and the internet were also non-functional. Despite the backlash, the government enacted a full lockdown in the region, preventing meetings of more than 4 people, establishing, curfews and increasing the number of troops in the region by 10,000. All these factors contributed to the creation of a climate of fear and anger in the region, that continued even after the claims from the government that the measures were set to help prevent any violent incidents. Multiple protests erupted across Kashmir that were met with violent opposition from the troops. Pakistan also reacted very quickly to the situation, as its prime minister threatened to appeal the case in the UN and other international platforms. Repeated threats from the Pakistani government for a downgrade of the diplomatic relations with India, has also fueled the fear of a potential war outbreak between the two countries. The response of the international community has been subtle, journalists and human rights activists have called Kashmir a second Palestine, but the international political leadership have not issued strong words. The USA has subtly offered the help to mediate the conflict and the UAE and Saudi Arabia despite siding with Pakistan, have not issued strong words towards India (Al Jazeera, 2019; Srivastava, 2019; BBC, 2019).

But what does this mean for the population? How have they been affected? Human rights activists have insisted that the revocation of Article 370 is a violation of the fundamental human rights that the Kashmiri deserve. The measures taken by the government of India to allegedly ensure peace in Kashmir, also did not shed a positive light in the situation. Kashmiri people were forced to remain on lockdown for months in the end of 2019 with limited to no access to telephones, media and internet and their political leaders were placed on house arrest. The deployment of thousands of military troops added to the collective fear and uncertainty of the situation. On September 15th 2019 Al Jazeera reported that there had been about 700 protests in the valley since August, despite the lockdown measures. About 4,100 people were arrested across the region, most of which were released after a week or two. Tension intensified also in the line of control between India and Pakistan, with Pakistan claiming that unprovoked Indian troops opened fire and caused damage and victims on the Pakistani side. The panicking population stockpiled food for months and tourists were urged to leave because of the threats of possible terrorist attacks (Al Jazeera, 2019).

Before the situation could be in some way resolved or clarified between the two countries as well as between India and Kashmir, the COVID-19 pandemic hit. Kashmir was forced to deal with a twice as troubling and uncertain situation, the change of its political status and autonomy as well as a worldwide pandemic. The population continued to remain on lockdown and deal with the threat of COVID. The inhabitants were justify more confused than ever, as the situation continued to become more and more complex with each crisis that befell them. During this time, the Washington Post conducted a research among 593 college and university students, with the main focus on finding out how they felt about the situation. Were they enraged? Did they believe the situation could be solved diplomatically? Did they have faith in these processes. The results were surprising as most of the youth interviewed expressed hopeful and optimistic views about the situation and its possibilities to be solved peacefully and justly. About 60% of the respondents believed that peace negotiations between India and Pakistan could be effective and 83% expressed the positive view that the participation of Kashmir representatives would make the negotiations even more effective. Participants expressed the common view that the best route to determine the future of Kashmir would be through a plebiscite that would serve as the proper tool for the people of the region to choose the direction for the future of their country (Ahmad & Biberman 2020; Roommana, 2020).

After lockdown was gradually being eased in India and the whole world, it was made public that since May 18th up to 25,000 people that were not permanent residents in Kashmir, were granted domicile certificates in the Indian-administered part of Kashmir. This act has been viewed as a first attempt from the Indian government to change the demographics of the only Muslim-dominated territory in India. These certificates also entitle people to getting government jobs and public office positions, which before the revocation of Article 370 were reserved solely to permanent Kashmiri residents. This has sparked a lot of fear and suspicion that Kashmir will be turning into another Palestine and eventually cease to exist, as more and more people from other Indian states claim property and official posts in the region. The Indian government has denied all claims of a desired demographical change and has emphasized that everything has been done to try and integrate the Jammu Kashmir region in India (Al Hazeera, 2020).

When discussing Kashmir, there will always be complications, anger from either one side or the other, however the revocation of the rights to autonomy for a region that was historically diverse and autonomous, constitutes a serious violation of the human rights. None of the policies revoked hindered the successful integration of Kashmir with India. They did, however, protect the continuation of a region that is diverse and home to the only Muslim majority in a predominantly Hindu India. If one also keeps into account, that the government revoking such rights is currently led by India’s nationalist party a question emerges. Is this really about integration? Or is it more a forced assimilation of a region that has historically been coveted by India and its neighbor and rival Pakistan?