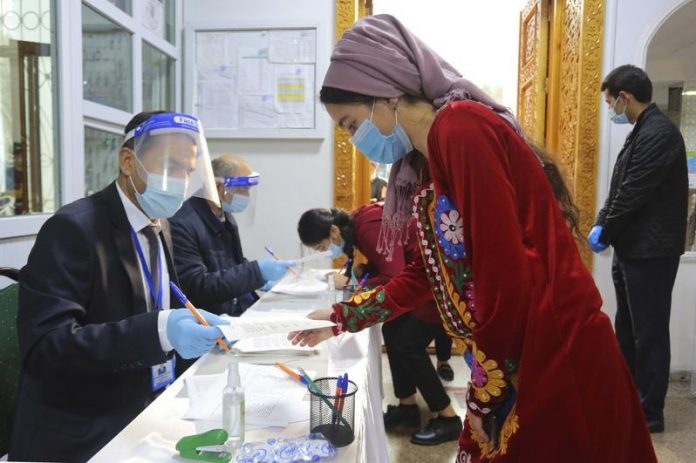 Presidential elections in Tajikistan held on 11th October 2020 ended with the expected result with the win of main favourite and current president Emomali Rahmon. Emomali Rahmon was re-elected in his fifth elections in a row, what allows him to continue to lead the country without break since 1992, making him the longest-serving leader in post-soviet region at the end of this seven years long mandate.

Voting System in the Presidential Elections

Officially, the Tajikistan is a republic with three branches of government consisting of judicial executive and legislative branch. On the surface, there exists the balance of power between all three branches, such as in any democratic republic, but in the reality, the president holds power and influence over all of them. In the elections, there were five officially registered candidates, but also few others which were not allowed to participate or were rejected by the commission. Candidates for president must meet the criteria of age – between 30 and 65, speak the Tajik language, having resided in Tajikistan for the last 10 years and collect the signatures of at least 5% of registered voters. Nominations of candidates are also restricted, where only political parties, the Federation of Independent Trade Unions, the Union of Youth of Tajikistan and regional councils can nominate them. Voters must be at least 18 years old on the day of the elections, and if the winner of the first round receives more than 50% of votes, there is no second round. As of changes made in 2016 through the referendum, the president is able to rule for an unlimited number of terms (IFES, 2020).

Emomali Rahmon crushed his opponents in the elections, receiving 90,92% of votes, the total number of voters reaching 3,853,987. The second place belongs to Rustam Latifzoda, who received only 128,182 votes. Other three candidates got less than 100 000 votes. As we can see, the difference is overwhelming for elections in a democratic republic (Қарори Комиссияи…, 2020).

According to the results, 85% of eligible voters came to vote on the day of the elections (Қарори Комиссияи…, 2020). Spokesman of the European Council, Peter Stano, said in the statement that the elections were organized in a peaceful and orderly manner, but also noted that the recommendations made by the Organization for Security and Cooperation in Europe’s Office for Democratic Institutions and Human Rights (OSCE ODIHR), were not implemented. The recommendations were pointing on a free media environment and political plurality. All the previous elections were not deemed fair and free by the West and it is probably going to be same now. It is also important to note, that all the other candidates were from pro-government political parties, which gives the elections the look of fraud and fake democracy. RFE/RL in their article provided video of two voters, who openly claimed they voted on behalf of their family members, which is forbidden and unlawful in Tajikistan. The final point to problems of elections is that the main opposition political party, the Islamic Renaissance Party (IRPT), was outlawed and so their candidate couldn’t enter the elections. Also, the Social Democratic Party, which is in opposition and in the parliament, boycotted whole elections as a protest (RFE/RL, 2020). Similar negative feedback on the elections came by OSCE in 2013 in their final report on their mission (OSCE, 2013).

Deutsche Welle calls him Tajikistan’s eternal ruler, because he rules the country for 28 years constantly, challenging the last dictator in Europe, Alexander Lukashenka. Emomali Rahmonov was born in 1952 in the village of Danghara. He started his career as an electrician at a cheese factory, following with three years of military service as a sailor. Before the collapse of the Soviet Union, he became director of a sovkhoz and after the collapse, he was elected as a people’s deputy of the Tajik parliament, following with the head of the Kulob province in 1992. The same year the parliament elected him chairman, the highest political position in those times, and he became the head of the government. He took the presidential position in 1994 when it was re-established. In the 1990s, Tajikistan was embroiled in a civil war, ending in 1997, when the government side led by Rahmon signed a peace deal with the opposition. This peace deal was abided for several years until the 2000s when slowly, but systematically, he ousted most of the political opposition finishing his job in 2015. Deutsche Welle also describes him as eccentric, where the propaganda of his persona is somehow mystic and strange, sometimes even comparing him to the sun. Tajikistan is also becoming something as a family business, when his son Rustam Emomali, was appointed head of parliament, his eldest daughter Ozoda is head of presidential administration and her husband deputy head of the National Bank of Tajikistan (Bushuev, 2020).

The State of the Country

The world is shaken by COVID-19 pandemic in many ways, and Tajikistan is also not an exception. According to Worldmeter, collecting the data from all countries, at the beginning of November, there were around 11 000 positive coronavirus cases with only 83 deaths (Worldmeter, 2020). These numbers are most likely falsified. Tajikistan is on the 161st place from 180 countries in the World press freedom index, which makes it hard to verify the official numbers (RSF, 2020). RFE/RL’s Tajik Service tried to find out the real numbers. They were met with limited options, however, they have documented at least twice as many deaths connected to COVID-19 as the official numbers claim (RFL/RL, 2020). There are no other reliable sources to neither verify nor challenge the official numbers, but the anti-coronavirus measures taken during the elections show us, that the situation is worse than it is officially presented.

Human Rights Watch characterized the human rights situation in Tajikistan as dire and worsening as of 2019. Similar to the situation with the freedom of the press where the internet is censored or critical journalists jailed, the political opposition is jailed, criminalized and nongovernmental organizations (NGOs) are subjected to intimidation. The state even used INTERPOL to forcibly return political opponents from abroad (Human Rights Watch, 2019).

Tajikistan has a border with Afghanistan, and so the security situation is not favourable, where the threats of terrorism must be taken seriously. Altogether, a lot of the citizens of Tajikistan joined the Islamic state in latest years including some of the higher officers from state regime. Terrorist groups and the Taliban on the border pose a large threat, especially for the young generation, which is easy to manipulate and brainwash for the jihad purposes. The US Department of State provides a yearly report on the Tajikistan terrorism situation which describes the cooperation of state in war on terrorism and also the attacks committed by terrorists in the region and in Tajikistan.

The economy of the country was shaken by the pandemic similarly to the rest of the world, but with the intervention of the government and central bank, the situation is expected to get better near the end of the year. In the economic index of freedom, Tajikistan occupies 155th place between Angola and Micronesia. Its score and statistics are far below the regional and world averages. The economy of the country is ranked as un-free, strongly depending on the export of natural resources and increased remittances from Russia (Heritage, 2020). The problem of the Tajik economy lies in almost 1 million of workers, who usually work in Russia or other neighbour countries, but because of the pandemic, a lot of them had to stay at home without work and pay to live off (IFES, 2020).

Author’s opinion on the future of the country

The elections held last month were mostly a fraud to demonstrate the power and influence of the Emomali Rahmon’s administration and him personally. Since the opposition was mostly eliminated, shrinking into one official political party without any power, and other opposition being criminalized as radical Islamists, his rule can be challenged only by huge economic crisis followed by a mass protest, otherwise, he is probably going to rule until he dies.

The pandemic hit the economy with a serious blow, leaving hundreds of thousands of people without possibility to go work abroad. These people can be the engine for the possible protests. The inspiration can be found in neighbouring Kyrgyzstan, where the demonstrations after the elections made the president and the government resign.

Tajikistan, as a state belonging to the Russian sphere of influence, is probably not going to undergo any political shift in coming years, and even if there was a try to some revolution, it could follow the current situation in Belarus and maybe even worse. This is due to the fact that it seems that the leader of the country connected himself already to the state and he won’t give up on his power and position so easily. He demonstrated his strong and unbreakable position throughout these elections.